Scout and I are back in Apia. Despite waiting 2 hours for a bus that never showed and a taxi driver who took his sweet time picking us up, we made the boat with seconds to spare. In addition to carrying people across the isthmus, the boat also ferries cars. Usually the cars are loaded on after the people are already on board, but today I had to walk the narrow paths between cars, cat in box in hand, up to the front of the boat, where I realized the doors to the upper levels—where most passengers ride—were locked.

So I sat with the cars and a handful of passengers who were staying down there by choice. The car compartment has no windows, so it was a strange way to ride a boat. I hear some people prefer to ride on the bottom because being low and near the center of the boat is a good way to avoid seasickness. I, on the other hand, like to look out and the horizon and watch it move with the listing of the boat. Not an option today.

But after a while I took out my book and wiled away the time. And now we’re back in Apia.

I figure I’ll keep today’s post short so I can catch you up on pictures from the past couple days. 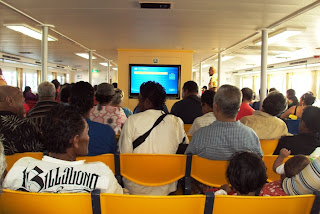 This is the inside of the air-conditioned cabin of the new boat. It's got seats, not benches, and passengers are not allowed to lay in the aisles contrary to the common practice on the other boats. 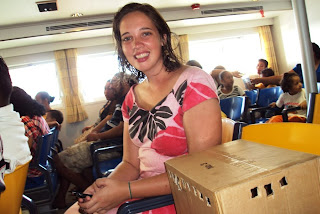 Blakey and the cat (inside her box) on the new boat Thursday morning. 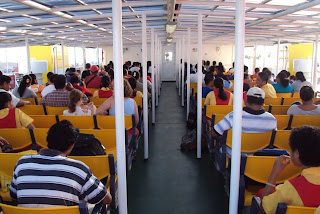 The upper level of the new boat is outside (and therefore not air-conditioned), but it does have a translucent roof, and laying in the aisles is allowed up here. 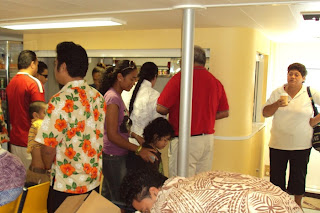 The air-conditioned level has a canteen/snack bar where they sell saimini and tea and coffee among other things. 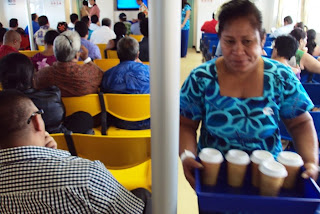 Also, there's a lady who walks around selling coffee. It costs $2. 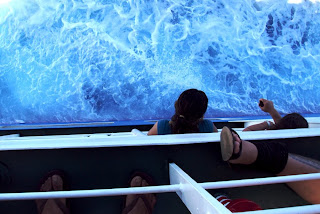 Both levels allow passengers to sit outside and watch water go by. 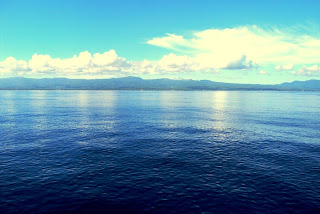 The northern coast of Upolu as seen from the new boat. 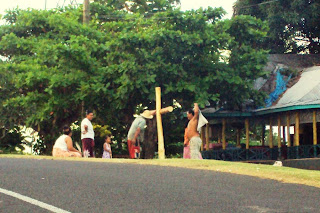 I don't remember this from last year, but I guess that's because I spent Good Friday in Apia last year. Apparently it's fairly common to construct a cross and put it in the middle of your front yard on Good Friday. It's a little like hanging your American flag on Memorial Day or something like that, I guess. Although the cross makes it look like you're going to have a ritual crucifixion, which is kinda weird. 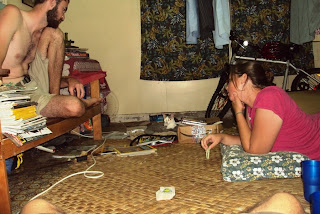 Phil, Blakey, and I sat down to play cards, and the cat wandered in and sat down directly opposite me, as though she wanted to be my partner in Bridge. It was funny. 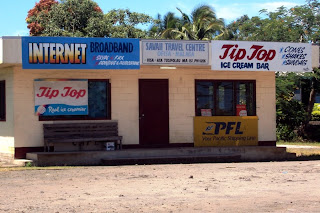 I don't have much to say about this picture. I like the storefront. 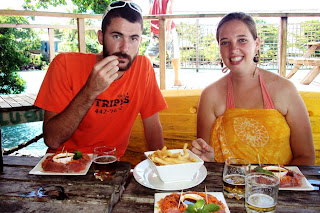 Phil and Blakey eating lunch at Lusia's on Friday.

I like this picture, so I'm posting it twice. Doesn't it sort of look like a more tropical version of that popular Pink Floyd poster? Left to right: Slovenian tourist whose name escapes me, Leah 82, Dan 81, A.J. 81.

That picture reminded me of Pink Floyd too! I'm glad you had a good weekend. I love seeing all the pictures!

thanks for the pics of the new boat! look forward to experiencing it next trip to samoa.

Sole they got broaband in Savaii.