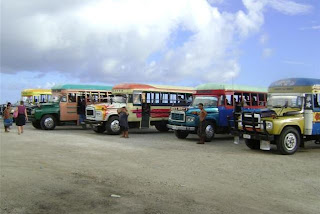 “Life moves pretty fast; if you don’t stop and look around once in a while, you could miss it.” So says Ferris Bueller. In my post-college career path, I’ve run the gamut of personal time policies. eCivis, as they did with so many other things, cracked the whip when employees asked for time off. CNET had a user-friendly automated system where you could request time off and get it approved without ever having a verbal conversation with your manager. At my school now, things fall somewhere in-between.

I took the day off from school today. Luisa and I are on Savai’i this weekend, and I wanted to take the fancy new boat, which leaves weekday mornings at 8. So Wednesday afternoon I walked into my pule’s office and asked if I could miss school today.

As with many other aspects of life in Samoa, this type of request evokes contradicting viewpoints of tradition and modernization. I think the old mindset used to be that having a guest in town completely justifies dropping everything to roll out the red carpet. I’ve heard other PCVs have had no problem gaining permission from their pule to miss school when they’ve had guests in town.

On the other hand, by so-called modern standards, the simple act of hosting a guest justifies very little. The longer I work at my school and talk to staff, the more I’ve come to see my pule as someone who was brought in to whip some discipline into my school. Even the difference between last year’s mindset and this year’s seems like a pretty big (albeit gradual) step toward discipline. Thus, whereas other volunteers would get no push back when asking to miss a day of school, I had to justify myself a little.

My year 9 science class is going to be manic next week. Mid-term exams begin the following Monday, and we’ve still got most of the “Micro-organisms” unit and the entire sweeping “Living Things” unit to get through.

Yet my conscience is clear: I don’t teach year 9 science on Fridays. And I told my pule as much.

He nodded. And then he told me it was fine if I missed Friday. But the message was clear: we mean business. 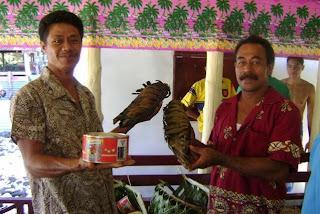 I found the above-the-fold picture on the computer in the Peace Corps Office in Salelologa. This is another.