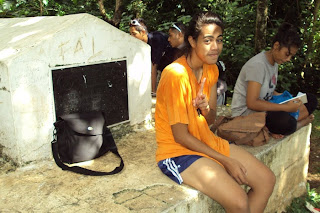 “Nobody write on the grave,” Maengi called out this morning to her year 13 science students. The class hiked Mount Vaea this morning to study the canopy structure and forest stratification. Maengi invited me and the other two Indian missionaries to come along on the hike as chaperones. As 20 students filed through the botanical gardens to approach the hiking trail, the groundskeeper got alarmed. He and Maengi had a short but intense conversation, after which she warned the group. “Nobody write on the grave.”

Robert Louis Stevenson came to Samoa in 1890, and though he died only 4 years later, he immersed himself in local politics in the then-occupied Samoa. According to Wikipedia, was “loved by Samoans.” They loved him so much, when he died, they insisted on carrying his body “upon their shoulders to nearby Mt. Vaea, where they buried him on a spot overlooking the sea.”

116 years later, the hike to the tomb is popular among tourists and natives alike. At the bottom of the hill, RLS’s house has been converted into a museum. The trailhead is out back. It’s a good spot to sight-see, and beyond that, the hike is good exercise.

Mt. Vaea and RLS’s grave are definitely a source of pride for Samoa. I recently thumbed through the year 12 English textbook and found a bunch of fictional short stories centered on Mt. Vaea.

It should also be noted, as commenter Nostalgia pointed out, Mt. Vaea at times has been a hip place for young people to congregate after the nightclubs closed.

In any case, the hike offers two paths: the longer, less steep path; and the shorter, more vertical path. The first three times I went up the long way and came down the short way. Today we did the exact opposite.

I believe the foliage is technically “rainforest” although on days like today, that seems debatable. It was interesting watching the students at work, trying to differentiate between the strata. They also did in activity where they roped off a square meter of ground and sifted through it to observe the diversity of plant life and the diversity of animal life. They then had to speculate on whether these two diversities had a causal relationship.

I didn’t hear the results of their study, but I enjoyed the scientific spin on the hike. And the view from the top is pretty great.

I hope you’re well. More pictures from today’s hike below. 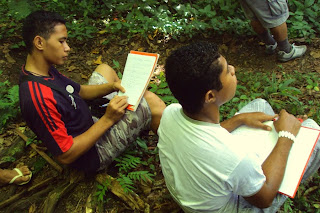 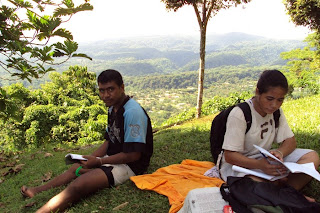 Students with valley vista in the background. 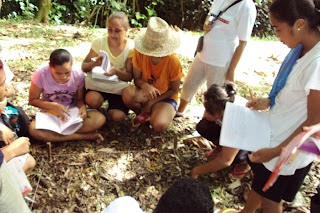 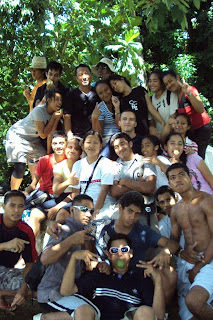 The group. I'm right in the middle of the photo, just below the NZ on the girl's t-shirt. 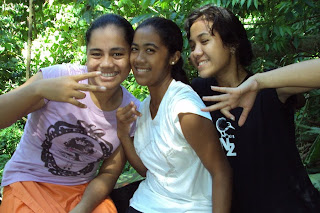 Wow this would be an awesome part of your English class. A trip up the mountain to honour the "Tusitala".

And btw, I think the nostalgic dude meant an ancient night club next to the 7thDAYAdventist school, where people used to go to get nasty. (the club, not school)