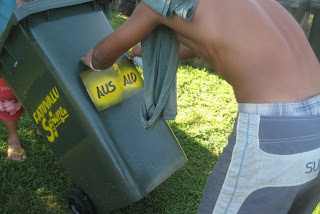 Not too long after we moved into our respective houses, Blakey and I met up for lunch in town one Saturday. We were sitting on a bench eating meat and cheese pies from Lucky Foodtown when a boy came up and tried to sell us some x-ray film. I sat, quiet and confused, but Blakey just had to know. “Why are you selling that? Who wants to buy this?” she asked the kid. And through pantomime, he explained that x-ray film works as a good stencil. Blakey was impressed. I was still unclear on how x-ray film gets imported and where these soles are getting it from.

They’re getting it from somewhere though, because it’s all over the place. My host family used the technique to paint parts of their house in the village, the art teacher and a few art students use it to logos for uniforms for athletics and for last year’s culture day, vendors in town use it to paint well-known logos (as well as slightly less known logos) on lavalavas.

The effect is eye-catching, and for a long time I couldn’t figure out how people were replicating the logos. X-ray film is sturdy and impermeable, and though it seems a bit surreal to see my students working with such an obscure material, it makes sense logistically.

Stencil is an art form in which I have little experience, and the ways in which people are able to connect all of the parts of a picture or a set of letters is impressive. It takes creativity and style to draw attention away from the fact that everything is connected.

It took me a while to get used to seeing Nike, Adidas, and Puma logos on ’ies around town. To be honest, I genuinely thought Nike was producing them when I first arrived. The prints are pretty convincing. It’s funny because even though these ’ies are made the same as every other ’ie in town, vendors can get away with marking up the price because the brand name creates demand.

One other thing that’s cool about this homemade logo manufacturing is the logos are responsive to the shifts in Samoan culture. Sure, there’s the basic lavalava with “Samoa” and the year screened on. In November and December it becomes quite chic to sport the upcoming year on your ’ie. But the stencil process allows for more specific references to pop culture. When Group 81 first arrived and pre-paid cell phones were still pretty new, there were a lot of ’ies with “Please Call Me” inscribed on them for sale (When your cell phone is out of credit, Digicel allows you to send 5 “Please Call Me” text messages for free.). Right after the tsunami hit—and still to this day—’ies with “Samoa Tsunami 29/9/2009” are extremely popular.

Someone should get a collection together and start a museum.

I hope you're well. Happy birthday, Katie! Pictures below. 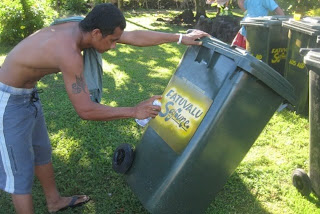 Painting garbage cans using an x-ray stencil. This picture and the one above-the-fold are taken from Ben 80's blog, I swim with sharks on a daily basis. With a grant from AUSAid, Ben got 6 wheelie rubbish bins for his village and their ongoing beatification project. Excellent work, Ben! 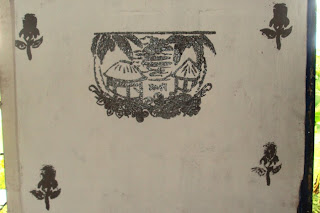 This painting on the wall of my host family's house was almost certainly done using x-ray stencil since the same image has been spray painted on the back of the family van. 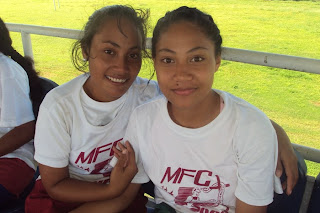 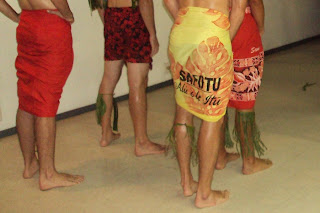 A PCV wearing an 'ie with a Safotu stencil. Safotu is a village on Savai'i. 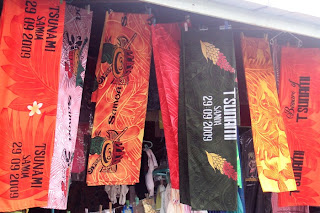 An array of tsunami 'ies hang in a booth at the market. 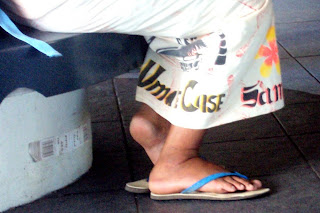 I saw this man and his "Uma le Case" 'ie at the airport in Pago. "Uma le Case" loosely translates to "Case closed." I've heard it here and there. Students love it when I use the phrase.

Awesome topic..when Batman first came out in '89. Everyone had to have a stenciled 'bat signal' tee shirt.

It was the must have faux logo shirt at school back in the day.

It's likely that used x-ray negative sheets are cheaper than mylar for screening and not as heavy as posterborard. It's reusing a consumable.

You can open your own T-shirt/Lavalava shop and offer Niu while shoppers wait for their Samoan-customized wear.

whoever invented this idea must be a genius! to save money from screen printing equipments, a survivor can use anything..lol not bad at all!.. perhaps I should try it myself..lol