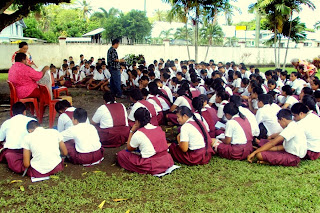 My friend Juliana is an English PhD candidate at the University of California Berkeley. My old roommate Liam used to read a book a day on his commute from Western San Francisco to the East Bay. PCV Erin has read somewhere around 100 books since we arrived in country, and Luisa garnered an “Eagle Eye” status at her public relations job. So I’m certainly not as qualified as some of my peers to be the authority on English—frequent blog readers should know how atrocious my spelling can sometimes be. That said, of all the students and staff who show up at my school every day, I am the sole native English speaker. You would think this might give my team an unfair advantage for the upcoming “English Day”. But given my relegated status, you’d be wrong.

Today was our first English Day practice, and though Luisa’s here and I had prep for my last period and I easily could have skipped out to go to lunch, I stayed. My team, Team Savai’i, met under the mango tree. Suasami and I were the first teachers out there. She handed me a piece of butcher paper with a poem written on it in Magic Marker. “You and I are teaching the poems.” I wanted to teach the song. Or at least have input in what song we’d be singing. “Bernie’s going to do the dance, and Apong’s teaching them the song.”

Since I’m an English teacher, I was on the English Day committee, and this year, events are as follows:
A note on this last one: my sister and I used to entertain each other by doing this. To get an idea of how ridiculous this looks, turn on “Hotel California” and stand in front of the mirror, dance-pantomiming the words. Between the “cool wind in my hair” and the “warm smell of colitas rising up through the air,” you will feel foolish. Guaranteed.

In any case, the rest of the teachers showed up, and Bernie took charge of my poem assignment. Before there was any discussion of what song we’d be singing, Apong was teaching lyrics to a song I’d never heard. It made me cringe a little because a few of these lyrics used glaringly incorrect English. One line went, “It fills our mouth with laughters.” My soul cringed a little.

But then I really felt expendable when I was handed a set of car keys and told to retrieve the guitar from the backseat of a teacher’s car. Ouch. That’s like having an EMT at the scene of an emergency, and asking him to go buy coffee while the other bystanders perform CPR.

Now I’m starting to sound cocky, which I don’t mean to do. I don’t want to be the smug know-it-all American, stepping on other teachers’ toes. But at the same time, I feel like an underused asset.

Whatever. I don’t think any of the judges will be native English speakers, and the whole point is to have fun. So I’m going to lay back, help out where I can, and not worry about it. If you need me, I’ll be in the shade. 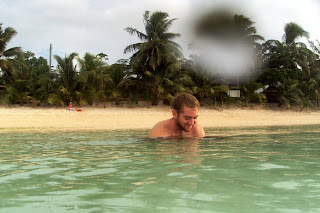 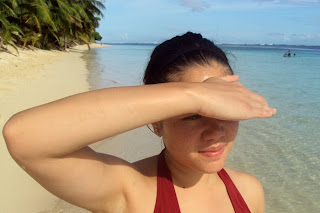 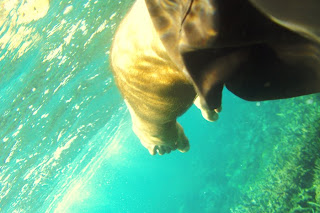 I'm still getting used to using the camera underwater. I accidentally took this one of my feet.

You should go for the 'dance off' job. Forget the poetry and speeches, dancing is where the laughs are. Cut loose and shake some 'spirit fingers'

the pictures lately have been outstanding! i dont know what this underwater camera bag thing is, but well done!