Wrestling with the CAT 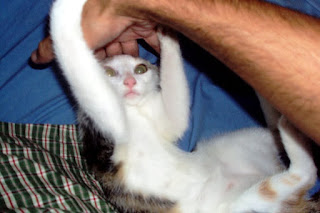 Jordan texted me with the news yesterday. “Did you just get a call saying they changed the cat date?” I texted back asking for the new date, but in my heart, I knew the answer. May 7. I’m not usually one to channel Murphy’s Law, but I guess scheduling my trip to Hawai’i the week after the first CAT was scheduled was an invitation for conflict. Oh well.

I should clarify. This year the Samoan Ministry of Education has decided to combine what have in previous years been the first two common assessment tests (CATs): file management and word processing. On one hand this makes sense since both of these skills are pretty basic, and it’s difficult to flesh out an entire test based on one or the other. On the other hand, they are two very different skills, and preparing for the test has been awkward.

In any case, the CAT was originally scheduled for May 7, but at the teachers meeting it surfaced this date was inconvenient for the Congregational schools (and I think the Methodists, as well?) on account of our breaks being earlier than the government schools’. We collectively decided to move the CAT to April 30, and the Ministry agreed. Perfect.

But now it’s back to May 7. I will be in Hawai’i. And though students are technically required to show up to school, with exams and English Day over, many of them won’t be showing up either. This is problematic.

Until this morning, Jordan was the only one who was officially informed of the date change, and Koa and I crossed our fingers it was just rumor. But during Interval, a teacher approached me and said, “I forgot to tell you. The Ministry called yesterday because your test is re-scheduled.”

So after school today I marched over to the Ministry’s headquarters (conveniently located right across the street) to give them a piece of my mind. I practiced my speech. I wanted to start with an emphatic “I’m VERY upset” said with a respectful Samoan lilt.

When I walked in the room, there were two boys being castigated for who-knows-why by the testing director, but their lecture stopped so I could come in and chat. Now that I had an audience, I lost my nerve and settled on, “The new dates for the computer CAT are very inconvenient.”

Friends back home know that I can get overly testy when I have a bone to pick; this often works to my own detriment. But today I stayed cool, calm, collected. I reasoned and invoked my students and observed how the date change put them at a disadvantage.

It was surprisingly effective. I was told I might be able to administer a different CAT prior to the test. Yeah, that works.

When I got back to my school, my pule was just getting off the phone with the Ministry, and he and I discussed the matter. We’ll administer the alternate CAT if they let us. If they don’t, I think PCV Jordan will come to my school and administer the CAT on Friday, May 7.

I think I’d be more aggravated, but you know, I’m going to Hawai’i. I’ll cut my losses. 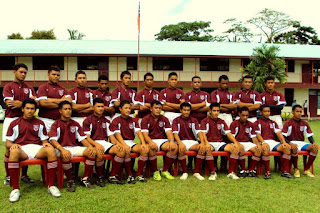 I took a team portrait for the school magazine. 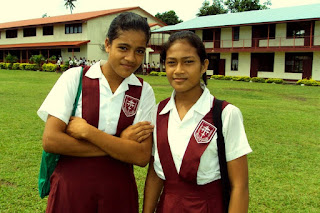 These girls asked me to take their picture after I took the team pic. The one on the right is one of the goofier (and higher achievers) in my year 9 science class.