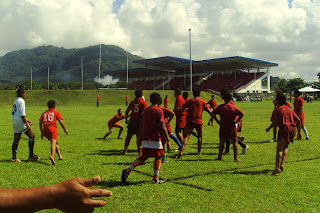 It was Jennifer’s birthday party, and I was camped out in her family room, by myself, watching the USC game on TV. Jennifer was one of my best friends growing up, and I was notorious for being an underwhelming guest at her birthday parties. But that year, she seemed to not mind. “We always knew you’d eventually come around to football,” she told me. All it took was attending the right school during the right decade. It’s easier to get into a sport when the team you’re rooting for dominates everyone else.

I heard and NPR commentary along this same line, examining whether UConn’s dynasty in women’s basketball has been good for women’s basketball. In the end, he gives an emphatic “Yes.” Watching the sixth grade rugby championship at Apia Park today, I understood.

Only a month or two ago, Apong and I were rugby novices. Even as spectators, we felt like we’d attended a foreign film screening with no subtitles. Today, we were experts, evaluating passes, debating strategy, criticizing, heckling. And I think the only reason we were able to acquire such expertise was because our team kept winning. It’s surprising how rapt one’s attention can be, even if it’s under 15 Minor B’s rugby.

And the final today couldn’t have been more exciting.

We didn’t actually know today was the championship game until we arrived. As it turned out, the team we played (and lost to) last week had fielded ineligible players and was thus disqualified from further play. So it came down to my school versus Koa’s.

We struck first about 10 minutes into the first half. It’s always gives a mental leg-up to take first blood, and the boys went wild with nervous excitement. We missed the first kick though. 5 – 0.

The other guys came back. It was just after a scrum and they had a few passes go back and forth and then laid it inside the goal just before we tackled. They made their kick for the extra 2 points. 5 – 7.

We somehow got a penalty kick just before the first half ended. It was well-placed, and the kid nailed it. 8 – 7.

Maybe 30 seconds into the second half, we got another penalty kick, this one at an even sweeter spot. The kicker lifted it straight through the posts. 11 – 7.

As with any sport, the pendulum swings both ways, and it seemed like just moments after our sweet penalty kick, the other team got one of their own. Right through. 11 – 10.

I should say, there’s no shade on the sideline, and it’s still so damn hot, we’re all drenched in sweat even though we’re not moving around. The game drags on.

My kids score. The side goes wild. We’re well into the second half, and this is starting to feel good though. We hold our breath when the kids kicks. The ball sails left. 16 – 10.

I think about starting a “De-fence” chant as we head into the final stretch. We just gotta hold them. The other team ends up controlling the ball quite a bit, but we finally manage to control a scrum right in front of our goal. The kid drops the ball into the scrum, walks behind and picks it up, and passes it to the kid behind him.

The ref is having none of that strategy, and 5 seconds after the throw-in, Koa’s team runs it into the goal, and places the ball on the ground. 16 – 15.

The field is so silent during the extra kick, you can hear roosters off in the distance. Even the breeze seems to stop to see what happens. The kick is worth two points, and thus will determine the winner of the game.

My boys take off from the sideline to block the kick. The kicker is unphased and takes slow, steady strides to kick the ball. He makes contact, the kick is not blocked. It sails into the air.

The first thing I hear, even before the ball has passed through the uprights, is the roar of the other side. Even from my vantage point, it seems there is no question: the ball passes through, the kick is good, the linesmen behind the goal raise their flags. 16 – 17. We lose.

It was heartbreaking and wonderful and heartbreaking. And wonderful. It was such a good game, and it all came down to that stupid play off the scrum. Oh well. Our sideline was somber and gloomy through the post-game prayers and coach’s speeches.

But on the walk back to the car, the mood already began to lighten. The kids were already throwing the ball back and forth again. As any gambling addict will tell you, the best part of losing is the thrill of playing again. 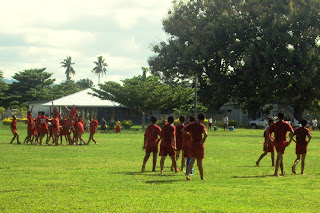 Victory on the left, defeat on the right. 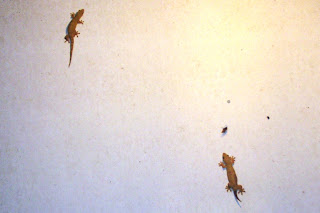 Huge geckos on the walls of Zodiac's bathroom. Sorry there's nothing to put them in perspective.

I'm surprise your team didn't pummel the one that missed the play. Kicking it would make the ball go further down the opponent's end, like a punt in football? I haven't watch rugby since I left Samoa in the 70's.

you probably hear this countless times!but hear it again! LOVE your writing, brings me home to Samoa every time =) and the suspense during the game! and the roosters in the distance..LOL so true! miss RUGBY