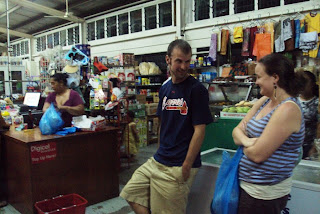 I hate getting yelled at. In third grade, I was talking to the kid sitting next to me during sustained silent reading, and Mrs. Tynes made me “turn my card.” More than 20 years later, I can still feel the sting. And so it’s no surprise that when the contractor barked at me while I was shopping at Lynn’s faleoloa this evening, I took it personally. But given the development climate in Samoa, I don’t feel like I was in the wrong tonight, so the feeling is less guilt and more miff.

I should explain circumstances. Lynn’s, one of the upscale faleoloas up the hill, is putting in tile. I never noticed the floors until this evening. They’re mostly cement with a few sheets of loose linoleum running up and down shopping aisles. With the recent advance in Apia’s grocery stores—Farmer Joe’s been raising the bar for the past year and a half and Lucky Foodtown has since completely remodeled—it was only a matter of time before Lynn’s would have to get a facelift to keep up with the Joneses.

In any case, my assumption is the contractors will be working all night tonight putting in tile. We walked in about an hour before closing to pick up eggs and rice. I wanted to check the price of cat food, so I had to walk into an area cordoned off with an improvised shelf of fruit. The crew was only sweeping and moving shelves around, and I didn’t give a second thought to crossing their perimeter. I decided against buying cat food, but then evaded boundaries again to search for rice. The Aussie (or Kiwi?) foreman barked at me, “Can’t you see we’re trying to work here?” I apologized and that was that.

But I’m not sorry. Samoa is a developing nation in the most literal sense, and if I had to respect work areas every time I came across a construction site or various “men at work,” I would never get anywhere.

In fact, in my experience I’ve found that it’s completely acceptable to step over construction equipment or to traverse gaping trenches with little more than a “Tulou.” Pardon me. Most of the time, guys don’t even look up. Over Easter weekend in Savai’i, I accidentally hopped off a bus directly into a patch of drying cement. The workers shrugged and waved (the cement was mostly dry anyway).

Since the road switch, the government has been constantly repaving roads in Apia. There’s also been underground internet cables installed and the new pressure sewage system. Stores and businesses have undergone much remodeling. The bottom line is the Apia I leave in December will be nearly unrecognizable from the Apia I found when I arrived.

Also, maybe I’m making American assumptions here, but Lynn’s is open until 10 p.m and as the customer, I have the right to check the price of cat food. Especially if the crew is still sweeping.

So I don’t feel bad for crossing the line. Apia’s bursting at the seams. Lines are crossed every day. 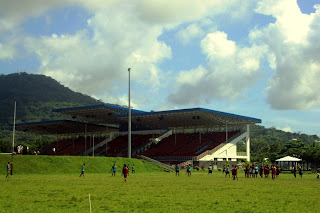 My sixth graders played at Apia Park today. They lost. First loss of the season :(

Hello! Excellent blog and great job! I'd like to have your Flag on my flag counter. I need your help for my collection… So, please, simply visit my website about “unusual stamps”: http://www.eryx.it/dentelli/index.htm
Greetings and good luck!

aww sorry about your team's first loss. But don't sweat it. I think you have a right to be irritated by the contractor.