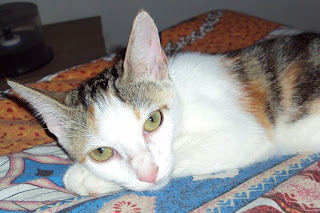 In America, the term “pet” has evolved over the past century from once meaning “domesti- cated animal” to now meaning “quadrupedal family member”. As the average nuclear family has shrunk from many children to 2.5, the need for companionship has increased, and pets have taken on that role. The pet industry has grown, the veterinarian workforce has expanded, and pet healthcare is becoming more and more of a sensible option. This trend hasn’t taken hold in Samoa as of yet, and so the difference in pet care can be pretty vast.

I remember one day in training, a member of Group 81 came back from lunch totally disgusted. The person’s host sister had kicked the family dog—this wasn’t a disciplinary tap on the nose or chastising the dog for being particularly swarthy or rambunctious. This was a run-of-the-mill kick to let the dog know who was boss, and it captures the head-butt of Samoan culture versus American. On the one hand, pets deserve our adoration; on the other, pets are consigned to their sub-human role.

This conundrum is fully visible in my host family’s dog, Rocky, in Fausaga. Rocky is the paradigm of Loyal Pet. He follows, waits, protects as necessary. And yet my host family gives him the mediocre treatment: table scraps, water where he can get it, a swift thwap! on the head when he needs disciplining. It’s a perplexing back-and-forth. One would expect a maltreated dog to act out, not embody the archetype of the loyal, protective pet. And yet Rocky abides.

This is a far cry from the American pet experience; no chew toys or leashed walks in the park, no visits to the vet or Milkbones, not even a pat on the head or even a makeshift dog house.

Being a pet owner is awkward at this intersection. I keep Scout inside, buy her canned cat food, and had cat toys sent from America. I’ve rarely seen host country nationals treat their pets this way. And yet Farmer Joe offers a wide variety of designated pet food, and Samoans who come to my house don’t think it’s strange the way I treat my cat.

When my student Amanda came to drop off my camera, she was accompanied by her two sisters, and the three played with Scout for a while. “Your cat plays a lot more than ours,” one sister said. It’s probably because Scout is still technically a kitten, but I think it could also be that I play with Scout a lot and she’s used to having a playful relationship with humans. Typical Samoan cats have a rougher life.

Dan 81 made a joke about the whole thing:


Two cats meet up, one fed by the merciless streets of Apia, the other from a well-fed Peace Corps-raised background. ‘So what do you eat most nights?’ the Peace Corps cat asks.

‘Whatever we can find; chicken bones, rice that falls on the floor, maybe a papaya rind,’ the hardened cat replies. ‘How about you?’

The pampered cat replies, ‘Oh, I have a little mound of canned chicken with a side of jellymeat.’

There’s an awkward silence, and then the hardened cat eats the pampered one.

There’s a feral cat that hangs out on my porch occasionally. It’s missing part of an ear. Scout has run into this cat 2 or 3 times. I’ve pulled her out before there’s been any confrontation, but I’m pretty sure Scout wouldn’t fair well in that fight. 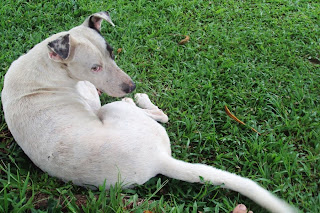 Rocky is one of the best dogs I've ever met. 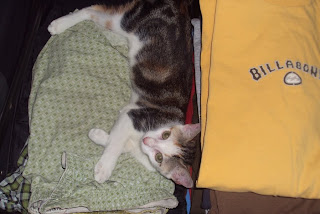 Scout laying in the warmth of fresh laundry.

It is sad, but very true. Samoans believe that a human being is more important than a an animal :) But it's strange, because Samoans are scared of black cats. :) Especially when you meet them at night or a black dog. :)