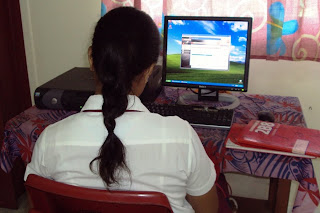 Today I struck back. I admit, the problem had been getting to me. I asked Phil over the weekend, “How do you keep your antivirus updated? Is there a way to download the updates separately from Avira?” No, he told me, you have to uninstall the program and then install the completely new version with the virus updates. He waited a moment, stared off into the distance and then asked me, “What have you been doing to keep your computers updated?” Nothing, I answered. He laughed.

I’m unclear on why, but for whatever reason, Samoan flash drives are sated with virus files. I don’t know what corrupted websites pass them on, nor what drives my students to such websites, but talking with other volunteers—Peace Corps and otherwise—the virus problem in Samoa is a cyber epidemic.

Last year things got so bad with students’ flash drives wreaking havoc on my server, some of my computers were rendered useless, and even my personal laptop took a beating. I had to completely banish flash drives from the computer lab this year.

Results have been lackluster. I’ve caught some of my most trusted year 12s and 13s red-handed. Usually they’re trying to copy music to or from their flash drives, pirating as indiscreetly as possible. On one hand, I empathize and stand somewhat impressed by my students; it takes a certain amount of familiarity to upload and download music so freely.

On the other hand, I’m a teacher, and therefore a micro-authority on piracy and copyright infringement. It’s like being a member of the Canadian Border Patrol during prohibition: it’s your job to keep the rascals out, and yet, the authority’s collective effort is so ridiculously ineffective, one feels silly for getting so riled up about the whole thing.

So today I took steps to deal with the problem. Based on Phil’s recommendation, I downloaded the new installation of Avira last night with the most updated virus definitions. Then during my year 13 class, I walked the students through deleting the old antivirus program, restarting their computers, installing the new antivirus, and running a complete system scan with the new antivirus in place.

I’d braced myself for a downpour. As I’ve said before, my server is sated with viruses, so much so you can’t plug a flash drive in without it being tainted with at least 15 different virus spawns.

With the help of the year 13s this morning, we conducted a thorough system scan of every computer in the lab, and much to my surprise, the scans came up nearly empty. I caught 3 viruses. Either my computers are cleaner than I thought they were, or the virus scanners allowed quite a bit through the cracks.

In either case, today’s activity with the year 13s went as well as one would have hoped. They stayed together through nearly during the entire process, and during the long virus scans, we managed to fit in a game of Hokey Pokey.

I’m looking forward to repeating the whole process next month. 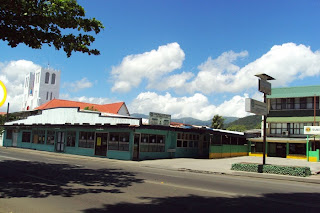 I think when I go back to The States, I will miss the variation of color and style in Apian architecture. It isn't cookie-cutter or run-of-the-mill by any standard.

Hey Matt, after reading your post I sympathize with your situation. I'm pretty sure the viruses you're dealing with are the same ones I dealt with 2 years ago. Here's some tips for you:

1) You can update Avira manually without having to reinstall the program. Here's a link to the Avira FAQ explaining how: http://www.avira.com/en/support/faqdetails.php?id=95

This manual update should work because it's what I did when I was battling viruses.

2) You might have only found 3 viruses because you might have spyware instead of viruses (Avira might not detect both). I've used a program called Malwarebyte's Antimalware for the past year or so to combat spyware issues and it's been amazing effective. Might be worth a try - I don't know if it can be manually updated though.

Hope this helps and good luck.

Just tried the Malwarebyte's Antimalware and it found 2 spywares that MS Essentials missed.

Awesome post Matt, at my old uni computer lab, the USB ports and CD/DVD players were all disabled to prevent virus & spyware problems.

1) can't access task manager?
http://tinyurl.com/6r9aq
don't do the registry one, do the 2nd one.

3) just cuz an antivirus gets rid of a virus, the changes that virus made on your system might remain...

4) this is exactly why i used windows2000 in my lab, it was too old to be affected by viruses and i never plugged in fishy usb's into my server. (windows2000 is available on Sara's awesome hdd in the office as an iso)

5) you could install linux (i know there is an ubuntu image on Sara's hdd) on 1 PC, stick a virus scanner on it (avira and free avg have linux versions) and make it the testing station.

6) i 2nd marques's malwarebytes suggestion. get it.

your current solution: updating virus scanner and scanning sometimes is poppycock. its not working. moreover, never once did i see this work well in samoa. even the savaii office PC got all junky and it updated and scanned regularly.

keep us updated on your progress!

oh, also, as suggested to me by my boss: windows steadystate

i never played with it, but it could be the answer to your problems.

also try a registry scanner. those viruses will screw your registry all up. there is one in the programs on the computer textbook dvd stuff. and yeah, as marques said, you can download just the updates for avira. i did it myself.