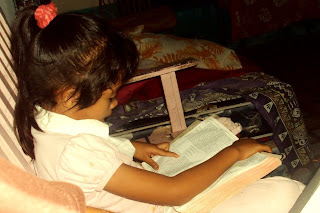 I grew up in a progressive Catholic household where we said Grace before dinner each night, but that was extent of any sort of family prayer. Our Mormon friends had Family Night every Monday, during which they’d watch a movie together or play board games or something else along those lines, and I assume there was a fair amount of prayer there. But their habits still don’t compare to the evening prayer custom here in Samoa.

As I understand it, evening prayer should be timed so that the sun is completely gone just as the prayer comes to a close. In Samoan, this time of day is referred to as Sā. Usually bells are rung to alert the entire village that it’s time for prayer. During Sā, all activity stops; a temporary curfew goes into effect, fale’oloas close, children come in from play. In general, very few people are out on the street—families can be fined by the village for not abiding by Sā.

Peace Corps aren’t necessarily held to such penalties, but it’s still a good idea to go inside and keep quiet, whether it be out of respect or simply to avoid dirty looks in your village. Of course, different villages view Sā with varying levels of severity. Cale and Sara’s village was quite strict; my school’s compound, not so much.

But by that hour of the day, I’m either inside my house or completely off campus, so it’s rare that my presence would interrupt Sā.

Either way, I admit I enjoy Sā even though I don’t partake. You see, since Sā coincides with sunset, the temperature inevitably drops by 5 or 10 degrees just as the bells ring for prayer to begin. Then, off in the distance, I can hear at least 3 different families begin to sing, often in multiple-part harmony. The effect is quite calming.

When I stay in the host village, I am given a central role in the family prayer. The sequence would go as follows: Mele would say a short prayer, we’d all sing 3 or 4 verses of a song, I would read the bible aloud in Samoan (it’s a phonetic language so it’s quite easy to read, even with a complete lack of comprehension) (also, Akanese has started taking over this job as seen above), Mele would say a really long prayer, and then we’d close with a short song.

As I said, all of this happens in Samoan, and I can follow here and there, but inevitably I zone out. But zoning out can be quite Zen-like, and even without hearing the formal structure of the prayer (or maybe because I couldn’t hear the formal structure), I can appreciate the practice. It’s not a terrible way to end the day.

Note: Jane emailed to point out village bells are often made from empty propane canisters. I never really thought about this before, but she’s totally right. Next time I see some, I’ll get pictures. 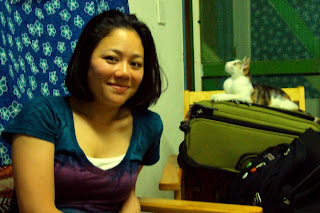 Sa is one my favorite memories of Samoa. Hearing that family, then the one over there, then the one on the other side all beginning their hymns and prayers is a unique beauty that sticks with you.

I dont like the Sa guards or 'leoleo' so much. They look menacing on the roadside with sticks. I've even seen someone struck a car for not complying to Sa conditions.

But Yaiiee for Luisa..welcome to Samoa. Make sure Matt takes you everywhere in Samoa.

Looks like Scout has settled right in on her suitcase, she's got a friend.

Some of my favorite sa bells on Tutuila are the compressed air tanks painted to match a bus stop (yellow with red stenciled hibiscus, for example).

A prominent judge was asked what we, as citizens of the countries of the world, could do to reduce crime and disobedience to law and to bring peace and contentment into our lives and into our nations. He thoughtfully replied, I would suggest a return to the old-fashioned practice of family prayer. "Lotu Afiafi" or Evening prayer .

I'm a googler who lives in the States, Georgia to be exact :). But I am grateful and thankful to your blog on Evening prayer. You should try and visit a village called Vinifou :)