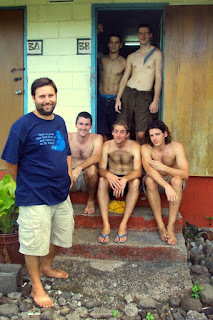 I fully intended to attend the embassy picnic. Charges d’Affaires Robin throws a good party, and there was no reason to think this wouldn’t be any different. It was a pot luck, and I planned to bring a box of Cheez-Its (what’s more American than Cheez-Its?). Trent’s plan was to make chili dogs, and he brought all of the dressings to my house, intent on using my stove to cook before we headed over to the picnic.

We did not attend the picnic.

With nearly every PCV in Apia for the 4th of July festivities, and with Samoa shutting down after 1:00 p.m. Saturday, I invited a bunch of people to my house to hang around for a while before we set out for the picnic. Often lazy Saturday afternoons are spent lounging around the Peace Corps office, and I figured it might be fun to have people over and change up the tired routine. So around 2:30 yesterday afternoon, 10 volunteers showed up at my door.

From the beginning, there was no urgency to get to the picnic. It wasn’t as though we were all raring to go, and then we slowly lost enthusiasm. Things were nonchalant and easy-going.

My frisbee has been lying around the house lately—the cat likes to wrestle with it, and I prefer she claw up the durable frisbee rather than shred rolls of toilet paper. In any case, Dan and Koa found the frisbee and went outside to throw it around.

Paul fell asleep. A game of Euchre developed. Trent boiled water to cook his weenies, but then he got distracted and Phil took over in the kitchen. The cat was cranky, and thus she was banished to the bedroom.

Paul woke up after a while, and he, Phil, and I went outside to join the frisbee game. For a long time we stood in a pentagon, attempting fancy between-the-legs catches and stuff like that, making fun of each other when someone screwed up.

My principal’s twin daughters were out on the field playing with the art teacher’s 3 sons. Frisbees aren’t too common in Samoa, and the kids were curious about our game. And when our casual tossing-it-around became “3 Flies Up” the kids sat down to watch.

The game was immediately competitive. Our rules were pretty open: pushing, shoving, holding, elbow-throwing? All legal. The Euchre crew came out to join.

The afternoon felt very fourth grade. When Chris left there were only guys left, and it felt like we should have posted a “No Girls Allowed” sign on the clubhouse door. When the frisbee flew over the fence, we had to run around and knock on my neighbor’s door to get it back.

After a while we all accepted we were going to miss the picnic, and no one seemed to mind. We ate Trent’s hot dogs, and around 5:30 we called for a taxi van to take us to Jordan’s house for Group 80’s Going Away party.

The people who actually attended the picnic showed up not too long after we did. It was a good time, from what I hear. Oh well. 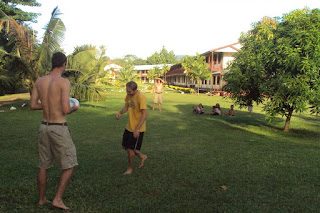 Phil and Trent playing 3 Flies Up. You can see Paul in the distance as the thrower. Paul is amazing at 3 Flies Up. We started calling him "The Greased Pig" because he was so difficult to catch. 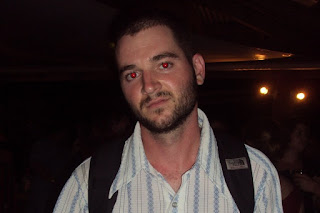 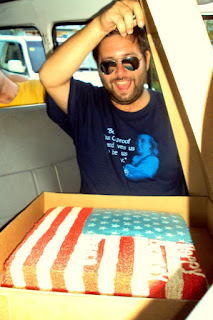 We picked up a cake that Jordan had ordered on our way to Jordan's house. It was a nice cake. 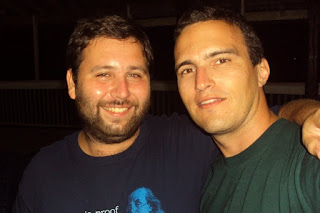 What! You missed the open bar? May I direct you to previous 4th of July debauchery?

There are standards to be maintained here man! Is it because your enabler went home?