Note: Google cannot corroborate the term "kiki". But that seems to be what everyone in Samoa wants to call it. I think this is essentially what Blakey was going for. Take the term kiki with a grain of salt. 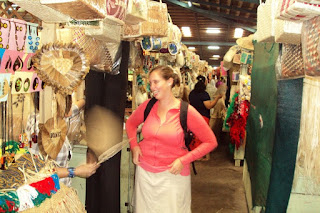 My roommates during and post- college were never into themed parties, and it seems like the people who throw them never invite me. I’ve never been to an ugly Christmas sweater party. Or a Pimps and Hoes party. I attended an 80s party once, which was a good venue to show off my Nintendo track jacket. But other than that, nada. But I understand the concept though, so I was down this morning to help Blakey find a kiki for her Tahitian dancer costume.

The Yacht Club of Apia had a benefit fundraiser last night. The party’s theme was originally “Vicars and Tarts”, but when this was decided to be too British, the theme was changed to Vs and Ts; that is, you had to come dressed as something that starts with a V or a T. Thus Blakey’s Tahitian Dancer. (Note: I never planned on attending the party, and I didn’t. No costume for me. (In case you were curious.))

When Blakey asked me this morning where I thought she could find a Tahitian leaf belt, I had no idea what she was talking about. I’ve seen many Polynesian dancers in my time, but it’s usually the motion of the hips that hypnotizes me rather than their adornment. I shrugged. Blakey thought the open market at Fugalei would be the best place to look.

We went booth-to-booth through the souvenir vendors, each of them offering up grass skirts, none of which Blakey had in mind. Blakey had a conversation with each one, asking specifically about a Tahitian hip garland. It was the kind of deal where you ask 10 Samoans and you get 15 different opinions. In the end, we divined 2 important details: the garland was called a kiki, and it’s usually made from leaves of the lautalotalo, which my Samoan dictionary claims is an ornamental shrub called a Mauritius Hemp.

It became clear very quickly that the thing Blakey was looking for was a consumable item, something like a Hawaiian lei that’s only meant to be worn once and then tossed before it rots. But we were shopping at souvenir booths where they sell things meant to at least last the trip home (often not much longer).

So Blakey decided to make her own. But where to find this lautalotalo? At the market, we ran into an Aggie Grey’s employee and asked him where we could find the shrub. “Aggie Grey’s!” he said.

Not wanting to poach plants from an upscale hotel, we sauntered on keeping our eyes peeled walking through town. There was an ornamental shrub outside the barbershop where I get my haircut. We had a brief debate about how to proceed. We didn’t want to take leaves without asking. So Blakey went inside to ask the owner.

I waited outside, quietly amused by the whole thing. She emerged rolling her eyes. “He says it’s not the right plant.” Hahaha.

Eventually we found a tree in a lonely corner of a parking lot with passable leaves. It was certainly not lautalotalo, but it got the job done.

We walked to the Peace Corps office, where Blakey strung her own makeshift kiki and I played cards with some other volunteers. 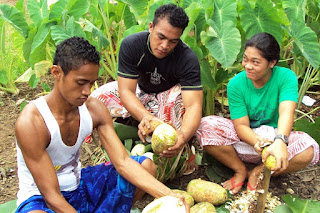 Friday at my school, the year 13s had their internal assessment for Samoan. Among other things, this involved making a couple traditional umus to roast pork, poultry, and other traditional Samoan cuisine. I had to teach during most of the festivities, so I gave my camera to my year 13 Amanda, who took 244 photos! Yeow! I didn't realize this until my camera ran out of memory during yesterday's wedding. Bad timing. Oh well. This picture and the ones below are from Friday's IA. 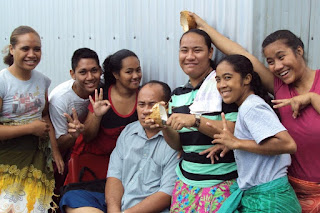 Giggly girls with the 13.1 form teacher in the middle of the line-up. 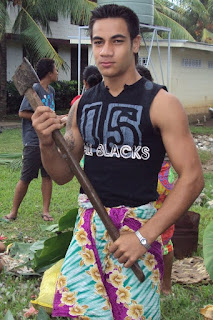 James with an axe. 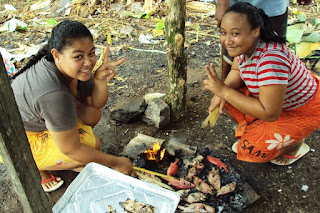 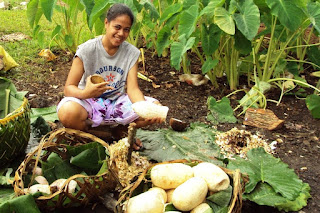 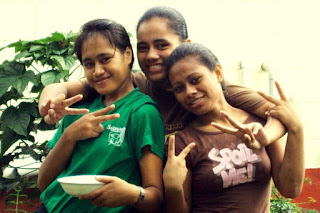 Girls pose for the camera. 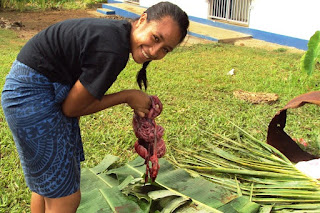 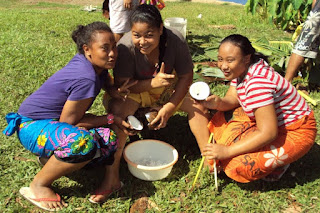 You're talking about either the Hawaiian 'Ti' plant or the 'Corn Plant.'

I think there are two different "Kiki" in Samoa. One with the feathers and one with the Ti leaf.