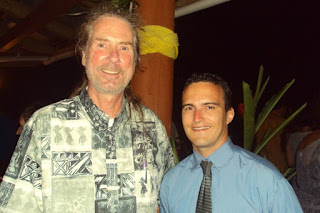 “It’s going to be a party for grown-ups,” said Charge d’Affaires Robin. We were up at her house a few weeks ago to watch the USA’s first World Cup match, and the subject of the 4th of July came up. Since the 4th falls on a Sunday this year, and since Samoa shuts down on Sundays, there was some debate about how and when we should celebrate. Robin decided on a picnic on Saturday the 3rd and a cocktail party, indeed a party for grown-ups, on the evening of the 2nd.

It’s possible she was simply communicating that children would not be invited to this party. As with most cocktail parties, kids were not allowed at last night’s. But based on her tone, I also picked up a certain vibe that Peace Corps Volunteers would be expected to act like grown-ups at this party. Volunteers have a reputation for goofing off and drinking the bar out of alcohol. Reading between the lines, I took the announcement of the “party for grown-ups” as a bit of a warning.

And it was right at that moment, I decided to wear a tie to the cocktail party.

When I came to Samoa, I packed a tie, just in case. I wore it to church during training, but since then it’s sat in my bedroom collecting dust. I also have a pair of khakis and good reversible belt that goes with brown shoes or black. I still lacked a dress shirt and proper dress shoes.

So I headed to CCK on Thursday. CCK sells new and used clothes for reasonable prices. It’s the closest thing Apia has to Target—with a little Good Will thrown in.

I found a blue dress shirt that matched my black tie perfectly. It was hanging on a rack in the thrift section; the second button from the top was missing. Even so, it seemed difficult to argue with the price: $3.

Shoes were slightly more costly and thus harder to justify. With ~5 months left in Samoa, it’s hard to rationalize acquiring more things. But if nothing else, I figure I can give the shoes away when I leave. Whatever. They were only $30. The only black socks they had were ankle-less, but I was fine with that.

It feels really weird to wear shoes and pants. When got in the taxi to head to the party, I swear I caught the driver snicker. I don’t get dressed up very often, and as much as it felt good to look good, it felt foreign and unfamiliar. But, if nothing else, I attended the grown-up party looking like a grown-up.

I hope you’re well. Pictures below.
Posted by Matthew at 8:00 PM

You look very nice! And very much like a grown up.

You are like the king of 'thrift' in Samoa.

And you do it with so much style and enthusiam..