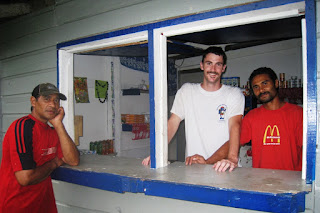 We had our first exposure to the Samoan small business when Phil’s host-cousin Onosa’i opened his own fale’oloa shortly after we moved to the training village. It was all completely legitimate— Onosa’i had the permits he needed and the blessing of the matais—and one bleary Monday morning, he propped open the storefront window and opened for business. Onosa’i put a lot of work into opening his fale’oloa, but often in Samoa, starting a small business is a lot more casual.

As the saying goes, necessity is the mother of innovation, and that’s true to an extent in Samoa. At some point a while back, some hungry bus-rider looked at the wealth of other passengers, and s/he decided those people would probably like to buy a snack. And thus tala chips were born. Sometimes the bus waits at the bus stop for more than an hour, and during those times it’s likely a man (or a child) will approach riders from outside the bus offering them chips from a laundry basket.

And the level of copycat-ism and piggy-back-ism would make any capitalist proud. Once there was one boy that sold taro chips. Then there were many. Then the boys started diversifying their product, adding banana chips and little candies to their product line. It’s to the point now that when you get off the ferry and on to a bus on Savai’i, you can buy a full dinner with taro, palusami, chicken, and curry.

In Apia, the current small business fad is to set up a tent and some speakers in front of your house on Saturday, fire up the grill, and charge ~$8 for a plate of barbecue. These setups aren’t always on the beaten path, and I have a difficult time imaging how a lot of them do much business.

At first these practices are baffling. How does anyone expect to make money when they’re selling the exact same products as everybody else? How can a barbecue pull in customers when there’s no signage and very little foot traffic?

I’ve talked to other volunteers about this, and the theory we’ve come up with is most of these small business aren’t intended to be money-making schemes. No one’s trying to get rich quick via $8 barbecue. Setting up a barbecue on a Saturday is just a fun way to pass the day. Like I said, you set up speakers, play some music, chill with the family. And it’s the same with the ladies out in front of Frankie’s. Saturday at Frankie Molesi is a place to see and be seen.

A paying customer is icing on the cake. 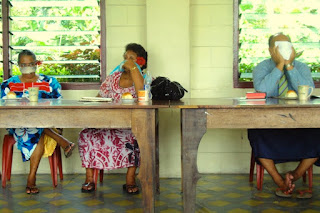 Today was Cover Your Face Day in the staff lounge. 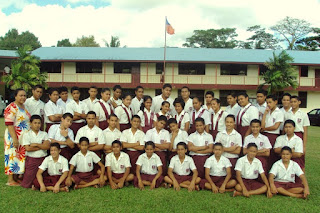 I've started taking pictures for the upcoming magazine. This is 9.4. I like the kid second from the left in the second row.