A Word from Our Sponsors 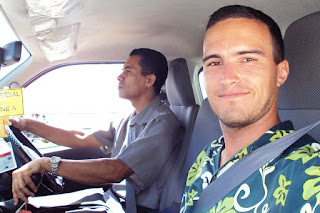 Even the lamest of field trips is far more thrilling than the banality of school. As with everything else in life, the destination isn’t nearly as important as the journey itself. And here’s something that is equally jarring in Samoa as it was in San Francisco: cities are busy in the middle of the work day. I spend my day cooped up in my computer lab—shouldn’t everybody else be doing something similar? Don’t these people have jobs? How is there no parking at the downtown shopping centre? These are just a few of the many bizarre parts of today’s 2-man field trip around Apia.

Over the past couple weeks I’ve been taking class photos for the school magazine, and during Interval this morning my pule asks to see everything I’d taken so far. So I trot out my laptop and show him my trove of tiny faces huddled in front of the flagpole. “These are nice,” he says. “We also need to take pictures for our sponsors.”

I’ve been on plenty of soccer teams and I played Little League. I know it’s customary to get some local sponsor to provide money for uniforms or trophies or whatever, and in return the sponsor gets a team photo to display prominently in his/her business. Yeah, cool.

Not what my pule had in mind.

“Do you have time to take the sponsor photos right now?” he asks me. The athletics students were working out, and I assumed we were going to round them up and take a photo for the TradePac Corporation, which donated uniforms.

We drive to TradePac’s corporate offices near Apia Park, and my pule tells the girl out front we want to meet with the CEO. As it turns out, the CEO is out on an errand, but he returns within 5 minutes, and my pule and I sit at his desk.

The CEO is clearly caught off-guard—as am I. This leads to an awkward exchange in which I take a picture I don’t really want to take of a person who doesn’t really want his picture to be taken. My pule smiles ear-to-ear.

From TradePac, we head over to Aggie Grey’s, who donated money for prizegiving last year (I think). Thankfully, the lady there offers to email me a photo, and we skip the photo shoot. I realize the photo she’ll send is probably one of the hotel rather than the staff, but I’m perfectly fine with that.

As we continue our trek across town, I realize we are un-salesmen, going door to door in corporate offices thanking executives and cajoling them into taking uncomfortable photos.

At Eveni Carruthers, we have actual business to conduct, picking up uniforms for next week’s athletics meet. She starts asking me questions about logistics and fiscal matters, which I defer to my pule, as if to say, “Look, Lady. I’m only here to take the awkward photograph.”

Our last stop is Samoa Stationery. The CEO is polite, and even plays along when my pule cracks a joke about me having 20 Samoa girlfriends. In the back of my mind I hear myself asking, can we please go back to school now? 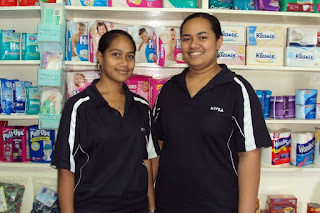 My pule insisted on getting a picture of these girls at TradePac because they're alumni. 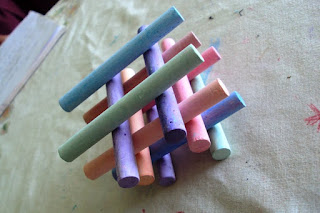 I made this chalk tower in my year 10 English class last week. Doing this with chalk is much more difficult than doing the same thing with crayons.

Labels: Apia, Out and About, Staff