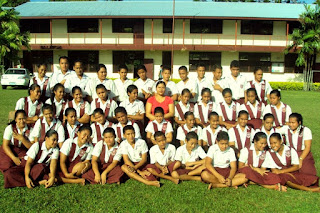 The picture that won me a blue ribbon at the Alameda County Faire my senior year of high school was taken by accident. I had enrolled in a photography class, and I brought my camera on a hike up Mission Peak. Coming around one particularly nice bend, I brought out my camera to get a shot of the sun low in the sky overlooking a bluff. I adjusted the F-stop, and between the moment my brain sent the message and moment my finger received that message and hit the shutter button, my friend Julius walked into the frame. Julius was wearing a beanie with a small brim that gave him a soldier’s silhouette, and with the sun low in the sky, he cast a long melancholy shadow. It’s a good photo, but it was taken by chance.

Taking photos to post on the blog, I’d say my eye has become a little more practiced, but on the whole, I am by no means a professional photographer. I say all this because it’s been interesting leading the charge in taking the class photos for my school’s yearbook.

The photos, all like the one above, are in my experience more reminiscent of tee-ball team photos rather than class photos. And when photos like this are taken in The States, there’s usually bleachers or risers or stools or something to help stagger the rows of faces—especially when there are give-or-take 45 people in each picture. Also, I don’t have much in the way of camera equipment. My camera equipment consists of a camera—and not even a very good camera. It’s a Sony CyberShot DSC-S950.

The process is a little bare-boned.

So I’ve been relying on the basics. I try not to take photos in cloudy weather, I have the kids face the sun, I try and fill the frame. I’ve been trying to use the same spot in the field to capture the Samoan flag and the school building in the background, but my school has stopped raising the flag lately (I think it’s too tattered?), so that feels a little pointless now.

It would serve me well to get one of those big curtains to block out the sun so I can see the image on the viewfinder—either that or get one of those weird little booths American football referees use to watch instant replays.

As far as posing goes, I’ve been relying on form teachers to whip the kids into 3 or 4 rows. Some have used chairs, some haven’t. I’m a little ambivalent about the whole thing, in part because there’s been no particular method that I have really liked.

I try my best to get the rows to look somewhat uniform, to get the boys sitting in front to cover their shorts with their ’ies, to keep oblivious wanderers out of the background. But mostly, if these pictures turn out any good, it will be a lucky accident. 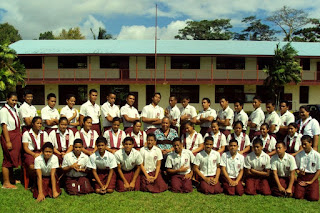 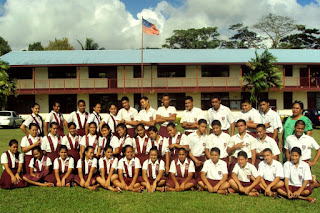 Lapalapa and 10.2. This one has the flag nicely billowing in the wind.