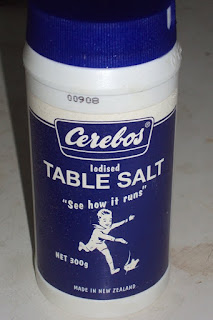 Most of my family quietly referred to it as “The Salt Capital of the World”. It was Bancheros Italian Restaurant in downtown Hayward, California; one of my late grandpa’s favorite places to eat. My family would joke that the menu, in addition to offering the battered half chicken and eggplant parmesan, also included a regular salt lick for those who wanted to take it straight. Based on this, I think my grandpa would be right at home in Samoa.

It’s hot here, and people sweat a lot, and when the body sweats it loses salt. In training the medical officer actually told us it might be a good idea to increase our salt intake to compensate for the climate. When I make popcorn, I’ll get the salt shaker out while the corn is still popping. On occasion my craving for salt will be strong enough I’ll pour some into my hand and lick it while I wait. I figure that sort of craving has got to be a sign the body is lacking salt. So perhaps salt’s prominence in Samoan cuisine is the result of a sort of dietary evolution.

Whatever the reason, salt has its place at the table. Coconut cream is salted to make pe’epe’e sauce. In my experience, whenever eggs find their way to the table, they’ve first been doused with a heavy layer of salt. At the pizza places around town, the plate of condiments usually has crushed red pepper, oregano, Samoa’s Own Chili Sauce, and salt.

The ubiquitous white canister of salt with the blue lid (as seen above) is seen at nearly every meal, but black pepper is a rarity. I’m not sure why that is.

And then there’s salt’s juiced up cousin, monosodium glutamate.

I don’t remember the last time I had MSG in The States. It seems more popular to explicitly say there is no MSG at a particular restaurant, and the few places that do use MSG use so little that it goes under most eaters’ radar.

Here the use of MSG is a little more relaxed. MSG is available in bundled packages at the grocery store, and it’s a popular ingredient at many restaurants. I was an official at today’s Zone A Athletics meet, and the lunch I was provided had a hearty helping of sapasui, the Samoan version of chop suey. I took a few bites that tasted like angry salt and sunburn. Mmmm. MSG.

MSG poisoning is not uncommon among Peace Corps volunteers. Symptoms range from tingly lips and a rash inside the mouth all the way up to vomiting and dizziness.

In the end, salt is a necessary evil. It’s a thin line between deficiency and hypertension. 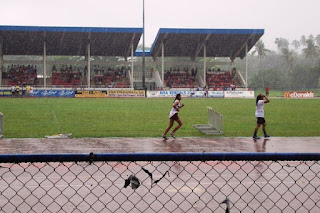 As I was saying, we had our Zone Athletics meet today. It rained. A lot. This is Year 11 Sunula running 1500 metres. 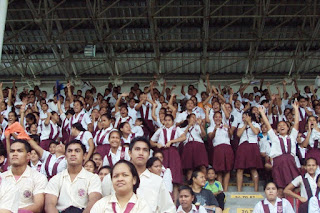 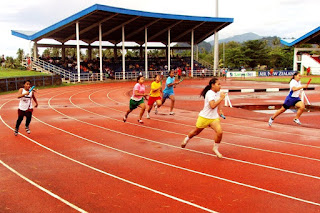 This explains why these potato chips I am eating at the moment taste sooooo good! I've been traveling and sweating myself silly for the last couple of weeks and tonight i just had to stop and buy some chips! Ha, well timed Matt!

The relay photo has one girl running in white socks(no shoes) and the other in sandels.