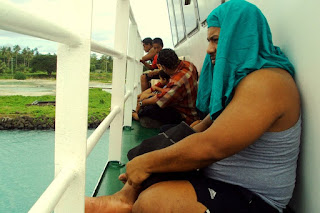 The “little boat” is the smallest of Samoa Shipping Corporation’s ferries; there’s only one platform, and it is used to carry people and vehicles. Loading up the boat is an awkward process because the vehicles usually get packed in so tightly it would be difficult for the people to get on the boat after the vehicles are already on. Instead, they let people on the boat first, then they load the cars and trucks.

But, like I said, they pack the cars in tightly. Phil describes it as a giant game of Tetris. There’s lots of maneuvering to pack all the cars on there; parallel parking, throwing it into reverse, etc. And all this happens with crowds of people standing around.

It is a uniquely Samoan experience.

Yesterday I was able to get a spot on the boat’s tower, so I got to see the entire process from above, and I snapped some photos. Enjoy the pictures below. 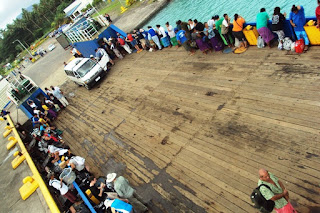 Here is the boat, all loaded up with people along the edges of the deck. 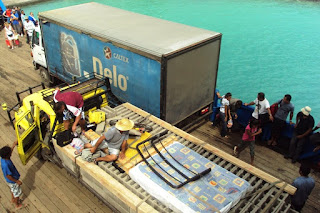 A truck backs into a narrow space toward the front of the deck. Notice the person on the wall getting pushed by the truck. 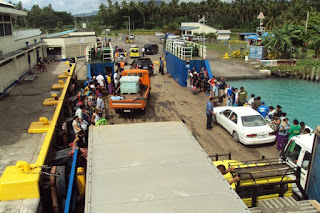 The boat half-full.  The white car is backing into people and the orange truck is about to be. 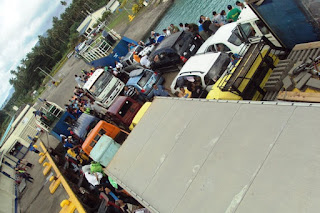 The deck is finally full. 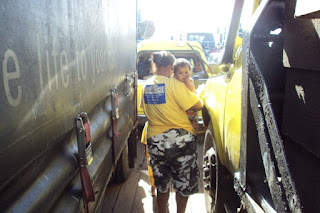 I followed a lady holding a baby through this narrow crevasse between cars near the end of the ferry ride. 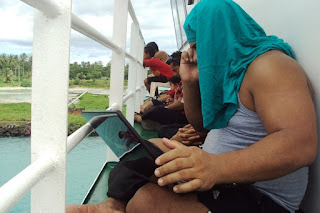 I was surprised when the guy sitting next to me pulled out a Toshiba laptop. Unexpected.
Posted by Matthew at 8:00 PM

This experience looks like the complete opposite from the "new" boat...

I stopped by a roadside stall on the Cross Island road where these kids where selling coconuts and keeping themselves amused playing games on a iPad..

I hate seeing those pictures of cars pulling in with all these around. That's inhumane, that would never fly in the STates. The government of Samoa is full of idiots, the people should sue the stupid government.

Taking the over-crowded small boat was one of the biggest adventures I had when visiting. It was crazy! Doing that again, but this time alone & with luggage is the one thing I worry about for my upcoming trip.

Hahaha Tetris! That's a good description. Always head for the shade, which means you've got to figure out which way the little boat will face.

Which Ferry is this? I've only ever been on the 'big' ferry to Savaii. Is there another one? ...Obviously there is. Learn something new everyday.