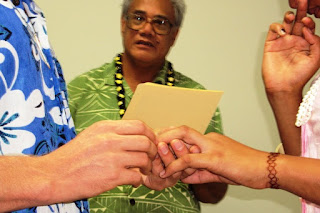 My theory: cell phones. From what I hear, marrying a Samoan used to be all the rage among Peace Corps Volunteers. You’d be sent to your isolated village, see most other volunteers rarely, and inevitably fall in love with one of the natives. In my head I picture Tom Hanks and John Candy in “Volunteers”, but I believe this trend was still going pretty strong even 10 years ago. But with the rise of Digicel, volunteers can keep in close contact with each other and even people back in The States with relative ease. And just like that, marrying a host country national seems to have gone out of style. Thus my excitement about today’s wedding.

I invite suggestions for the Cultural Exploration series, and the most frequent response is people want to hear about weddings. The only reason I haven’t covered weddings is because I have yet to attend one. Unfortunately, Friday’s wedding wasn’t all that “traditional”. The ceremony went down in judge’s chambers without the hoopla and fanfare I’d assume would usually go into a Samoan wedding. That said, it wasn’t all just signing of names and shuffling of papers.

Attendance was small, but so was the office. The entire list of attendees goes like this: Presider, Bride, Groom, Bride’s Sister, Blakey, Me. The married couple is on a pretty tight budget—getting the bride’s American visa requires flying to Auckland for an interview at the American consulate there, and flying to Auckland requires getting a Kiwi visa at the New Zealand High Commission here. Fees abound.

But On a Budget doesn’t mean Un-Sentimental. The bride and her sister cried during the exchange of vows, the groom panicked as he patted down his pockets when it was time for the ring, the couple shyly shared the briefest of pecks at the end of the ceremony. It was cute.

Blakey and I, neither tolerating the down-played nature of the occasion, pulled out as many stops as we could. Both of us sat in the back of the judge’s office snapping photos, a veritable storm of flash photography.

The quiet ceremony was followed by a cozy celebration at a swanky Apian eatery. I was quick to introduce the American tradition of clinking my glass with my knife to force the couple to kiss. The couple balked initially at the practice, but by the end of the meal they got into the spirit.

Blakey and the bride’s sister were signed witnesses on the marriage license, so my presence in Judge’s chambers was auxiliary at best. It wasn’t until the reception when my attendance became crucial.

After drinks were served, the groom turned to me and said, “You’re the Best Man, Matt. I guess you better make a speech.”

I’ve never attended a Toastmaster’s meeting, and after an embarrassing incident in high school, I try as hard as I can to avoid expository public speaking. Trucking through my mid-20s, though, I’ve attended a fair amount of weddings in the years leading up to joining the Peace Corps, and I heard some pretty good speeches. I don’t remember anything specific, but they’re all fresh enough in my memory I had a good ballpark to aim for.

So I let it flow. And if I do say so myself, it was pretty damn good.

Warm, heartfelt, funny. In fact, I think those words capture the whole day. It wasn’t a Samoan wedding, nor was it very American. It was a Peace Corps wedding. It’s too bad there aren’t more these days. 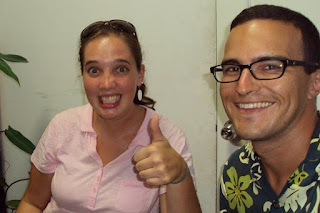 Blakey and me in the back of the judge's office. 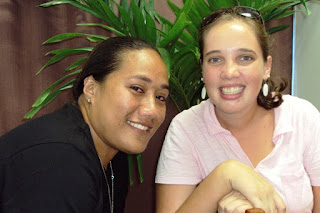 The bride's sister and Blakey.

Labels: Lifestyle, Out and About

Since you didn't show the faces of the bride & groom, I wonder if the parents knew about the marriage. Sounds like an underage girl, but definitely a peace corp wedding!!!

I would say that Blakey is so cute!!!

Please don't read into the fact I chose not to show faces or name names; there was nothing scandalous about the marriage.

I keep a blog, in part because I enjoy sharing my life with the world. But when I cross paths with others--especially during special occasions like this one--I have no business dragging them into the spotlight.

O.K. Matt, then who got married? I think tha is so nice of you and Blakey to attend, and a nice article about pisikoa marriage.

You've taken the diplomatic (pun intended) approach on this one. I like it.

Sounds romantic all the same and I'm sure they'll be happy together.

Shame your leaving in October, otherwise I'd invite you to our wedding in January which will be Fa'asamoa all the way. *sigh*