Taupo for an Evening 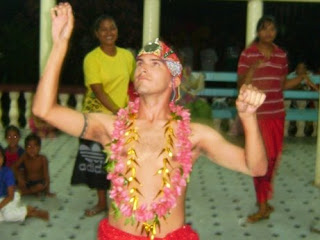 There’s a sign along Highway 101 just a ways south of Gilroy that says, “It’s Happening in Soledad,” which is somehow supposed to boast tourism to Soledad, California, I think. There’s something inherently pitiful about that sign, and it seems to be a bottomless font of humor for those of us from parts of California with, you know… buildings and people and automobiles and such. I mean, really, what could be happening in Soledad?

But if there’s one thing trips to the village have taught me, it’s that there really are interesting things happening in rural Samoa. Every time I go there, there’s some sort of village party going on. Last month it was the siva in Tafitoala, which was more like a church converted to a surprisingly legitimate dance club. This time, the siva was in Fausaga, but this Siva was more like a church fundraiser. The lights were bright, every other dance was a money dance, and there were an abundance of children less than or equal to seven years old. But for all intents and purposes, this was just as fun.

When I rolled into town on the pasi mulimuli, the last bus of the day, people were excited to see me, but the air was definitely abuzz with the impending siva just hours away. After settling in, catching up, praying, and dinner, I set off with Phil’s sister, Tuese, to walk across the village to pick up the rest of his family. Phil was not present in the village, but it’s just easier to refer to his family as his.

He did call though. He called Tuese on the way to her family’s place, in fact. I decided this was an opportune moment to make a phone call myself, and the moment where the two of us were standing on the road in front of her house waiting to finish our respective phone calls felt strangely American. I’ve been in situations back home where there’s been 3 or 4 of us in the car and by weird coincidence (or yuppy lifestyle), we all end up talking at the same time. One would think it an improbable situation for Samoa; particularly if at least one of the parties is actually Samoan. But it happened.

Anyway, arriving back at the siva, we took a seat on the wall across the road from the church hall and waited for the event to begin. I was thirsty, and my family’s house is right behind the church, so I walked back to grab some water. I was on my way, when my host brother (cousin?) Oge approached me.

Oge speaks very little English, but he had a lot to say, so he blurts out a long string of Samoan. The one word I am able to pick out is Taupo, which is the ceremonial virgin and traditional Samoan events. I was unclear on what was going on, but I figure the situation would work itself out. So when I grabbed my water, Asolima told me, “Mele wants you to be the Taupo for our family at the siva tonight.”

I was handed a string of shiny yellow beads that fall somewhere between Carmen Miranda and New Orleans Mardi Gras co-ed. The rest of my sparkles would come later. I was then given a crash course in the traditional Taupo does. It was later pointed out to me that Taupo is the female term, and that I was actually the Manaia, but everyone in my family continued to use the word Taupo to describe me, so take that for what you will.

Apparently Akanese had been originally slated for this Taupo duty, but when I showed up, it was decided that I would bring in more money. So not only did I feel a bit ridiculous, but I was also upstaging a 5-year-old. Great.

The one mitigating factor that allowed me to get this done was that I always feel like a bit of a buffoon in the village. So dressing up as the Taupo, and properly butchering the traditional dance was not dusting up my reputation; it was fulfilling my reputation.

And so this brings up some of the issues that Dylan touched on in his comments last weekend. Being in the Peace Corps, you want to maintain a certain level of dignity and respect that will allow you to get things done in your job. Otherwise, what was the point of coming all this way? But Palagis are perceived to have a bit of inherent buffoonery to them. Given this, volunteers must navigate the area between keeping a sense of humor and staking out a respected role. But all this happened in the host village, so it wasn’t too big a deal.

My Taupo number went fine. No one really cared one way or the other. In fact, it was downright anticlimactic. I asked one girl how she liked my siva. She said in broken English, “You were good. But not that much.” Whatever. At least it wasn’t Soledad. 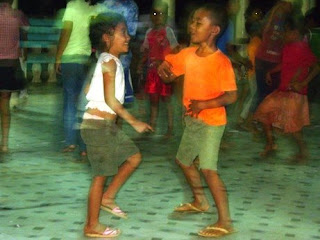 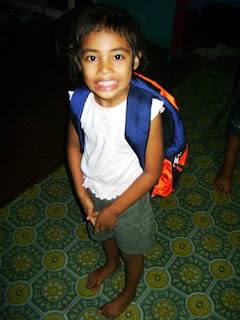 Asolima called on Thursday night and asked if I could pick up a backpack for Akanese. This is the one I got. 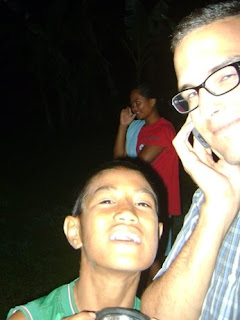 They yuppy cell phone moment. I believe the kid's name is Jasper. 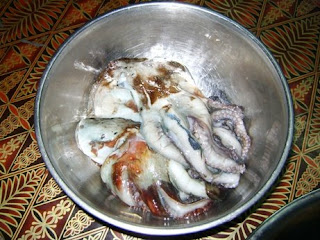 Phil's host father, who is my uncle (I think?), caught octopus. We had it for lunch today. 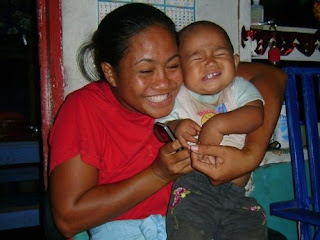 Tuese and the baby. The happy/sad juxtaposition is good.

HOTTIE! I just read this entry aloud to mom & dad. It would be like if you were actually telling it to us when you were 4 since we sound the same.

So how much money did you raise???

I just saw a production of "Cats" today...your not quite up to the glam of those costumes, but close!

it took me a few paragraphs reading into your blog before i realized that the 1st picture was you! very nice. i like your trips to the village. also, have you ever thought about posting a "glossary" page? then you could link the samoan words/terms to it and just add as you blog along. just a thought.

ha those kids dancing are super cute!! esp the boy! its all in the hands eh? its so graceful, more like story telling and less ..sexual like we have here in the states? ha

You are a "very Manaia Taupo". You have the eyes on the hand movement pretty good.