The CAT is Coming 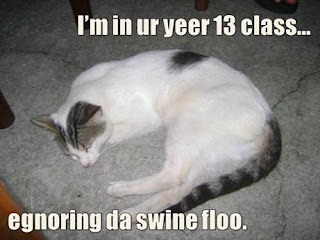 I’d been operating under the assumption the South Pacific Board of Education’s Combined CAT for year 13 students was August 27 until I had dinner with Cale and Sara a week and a half ago. As it turned out, a lot of people complained about the date and the SPBEA moved the test up to the 18th. This change apparently happened sometime around late March or early April, but many of us had not heard about it until recently. And with the unforeseen Swine Flu break, the impending CAT was the talk of the town this weekend.

I haven’t seen my year 13s since I was informed of the earlier date, so my teaching has yet to be affected. That said, I’ll (hopefully) see them tomorrow morning—assuming the inevitable morning assembly doesn’t get in the way of first period—and we are going to hit the ground running.

The SPBEA CAT for the year 13s is a more daunting liger-type beast as compared to the gentle domesticated tabby-like CAT the Samoan Ministry of Education administers to the year 12 students. The year 13 CAT requires a fair amount of critical thinking and combining of dissimilar skills; a far cry from the hand-holding and spoon-feeding required on year 12 tests. The other nice thing about the year 12 CATs is there’s 4 of them. If a student screws up on one or gets nervous at the beginning, by CAT #4, taking a CAT becomes old hat. Year 13s don’t have any preview or lead-up and then they must take a huge test with a time limit that counts for 30% of their final grade.

I was also under the impression several Samoan schools were the ones who complained about conflicting school breaks and were able to get the test moved from the 27th to the 18th. And therefore it would be somewhat likely the date of the CAT might be postponed or at least moved back to the original date.

As it turns out, this is not the case. The original date was challenged on an international level, and being that Samoa seems to be the only country in the South Pacific to cancel school on account of Swine Flu, there’s no international urgency to move the date.

But we’re freaked out here. A bunch of us haven’t started teaching Access yet—Supy hasn’t taught his classes the IF function in Excel yet. And the scary part of this is we’re only talking computers! Who knows what other work needs to be urgently completed or studied for other classes?

My plan is to spend Tuesday, Wednesday, and Thursday of this week going over Access, and then Friday, Saturday (Saturday class! Hooray!), and Monday doing practice CATs. But who knows which other teachers will hold class on Saturday? It’s unclear how priorities will stack up and how students will be able to juggle the time management involved in catching up on multiple classes, let alone the academic discipline involved.

I guess what I’m trying to say is the next 8 days are going to be really fun. 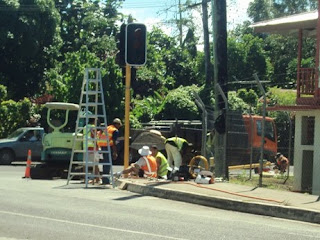 More construction crews at more intersections. The road switch is 4 weeks from today. 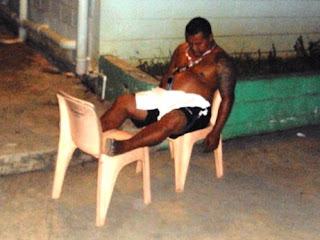 This security guard was sleeping on our walk home Friday night. 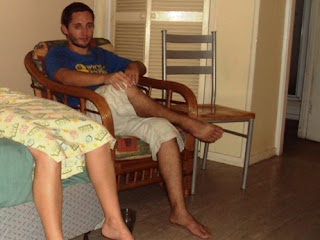