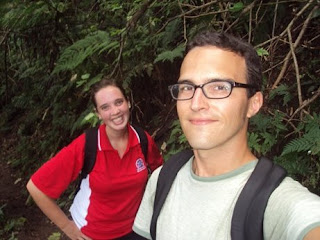 The plan yesterday was to have school as usual for all year 12 and year 13 students, which was great considering the factors I talked about Sunday. But the Ministry of Education got word of our plan, and threatened to take over the school if we went forward with having class. So students were sent home at Interval, and teachers were told to report to school each morning, but essentially school was canceled again this week.

I didn’t grow up in a hiking family, but I’ve managed to fit in a fair amount. I’m not an impassioned camper, I don’t own a pair of hiking boots, I don’t pack trail mix, but I like the climbing, the view, the conversation. The hike never gets too strenuous—unless you go when it’s been rainy and the mud becomes a factor—and walking up you usually run into lots of palagi tourists and Samoa natives.

My first time up the mountain was with one of the guys from the Congregationalist Church office, who goes regularly and invited me along. I asked if I could wear flip-flops. He scoffed at me laughingly and said, “Oh, no.” And rightly so. There is a fair amount of all-terrain-ness about the path, and an ankle strap is required at the very least. That said, Phil and Robby did it in Jandals. So I guess nothing’s impossible.

Though each time we’ve taken the same routes, each experience has been vastly different from the others. The first time was a work out of sorts; it was a focused speed-hike in which we got to the top in less than 25 minutes, and got back down in 20. The second time with my parents was just after (and during) a series of rainstorms, and the mud became a bit of an ordeal. And then today, after we’ve had no substantial rain in a week, the climb was easy and mellow.

My favorite thing about the hike, particularly the long path, is after a while the sounds of the cars and the weed whackers fade away and the beauty and the greenery and the quiet abound. And though there’s been no rain in a week, the rainforest floor is a healthy damp. Lizards scuttle across the path, and tropical birds can be seen if you look carefully. The leafy canopy is such that you can hear the rain falling on the temporary umbrella above before it spills over and the droplets actually begin to fall to the lower layers of the forest.

At the top RLS’s grave sits on a grassy plateau, and there are large breaks in the trees that allow picturesque vistas. It’s a nice place for a picnic. Or maybe just a Clif Bar and some water. 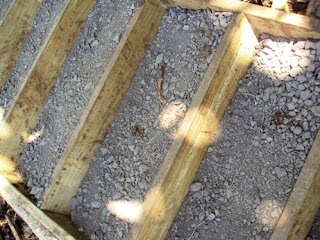 The path was much dryer today than it was last time. Most of the path isn't nice, manufactured steps like this, but they provide a good example of the dryness. Last time these were a muddy, soupy (Supy?) mess. 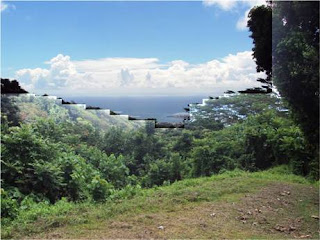 Composite photo of view from top. 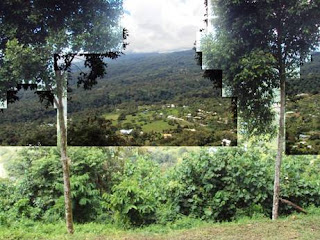 Another composite photo of view from the top. Yes. I need to get Photoshop. I know. 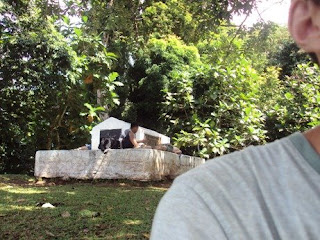 Difficult to see at this size, but this group of guys who ran up to the top (a common work out), did loud, strenuous exercises when they first got there, and then laid down and took naps on RLS's grave. Mildly hilarious.

Thanks for not mentioning how long it took to reach the top when your parents were with you! The view was beautiful and the mud eventually washed off.