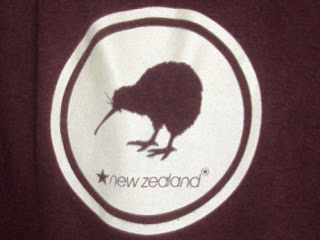 It’s a common joke on “Flight of the Conchords” that people from the United States haven’t heard of New Zealand. In one episode the Prime Minister goes to America, and the White House switchboard operator doesn’t believe New Zealand is an actual country. I’ve always been vaguely aware of New Zealand. I knew it was near Australia, I knew it had 2 main islands. I remember when Stephanie and Michelle Tanner accidently got on an Auckland-bound flight when they thought they were simply going to Oakland. Ha. In any case, since Samoa falls within New Zealand’s sphere of influence, I’ve indirectly (and directly, what with the whole trip down there in May) learned a whole lot about the country.

First off, New Zealand is near Australia in the same way that USC is near UCLA or the Hatfields lived near the McCoys or the premise of a Star Trek movie is near that of a Star Wars movie. The similarities may seem obvious, but best to place emphasis on the differences when you’re talking to someone involved. “Conchords” treats the subject with an air of humor, but the Tasman Sea Rivalry is a real thing.

Second, I admit I have trouble telling a New Zealand accent from an Australian accent. I am still forced to do my best to compare them to gross caricatures like Crocodile Dundee vs. Jemaine Clement or Kylie Minogue vs. Anna Paquin or Lyndon Borrow vs. Holly Hunter in “The Piano”. It’s a fine line. Sara claims she can tell the difference between kids whose extended family emigrated to New Zealand versus those whose emigrated to Australia. I can’t. Yet.

Third, it affects the sports that are played and watched here. And by that, I mean a whole lotta rugby. Cricket used to be more prevalent in Samoa, although I’m told it was “Samoan Cricket,” which had its own customized rules and which made international play nearly impossible. So a few years back they stopped playing “Samoan Cricket,” which kind of meant they stopped playing Cricket all together. Mostly it’s rugby—which is funny because the Onion World Atlas names Apia as the birthplace of USC Football’s defensive line. Truth be told, you have to go to American Samoa for football. There have been some efforts to get it here; Blakey was coaching a team at her school for a while. No baseball.

Fourth, when being formal and speaking English here, they say funny things. Parentheses are “brackets” (brackets are also brackets), parking lots are “car parks”, zee is “zed”, math is “maths”, review is “revisions”, and there’s always that strange “u” in colour and harbour and and flavour and contour et al.

Fifth, the (American) Peace Corps has been in Samoa doing quite a bit of teaching for the last 41 years, and consequently, the English here in Apia is a weird hybrid that is mostly Kiwi, but with frequent pockets of Yankee.

Sixth, any bar trivia contest—they’re few and far between—is bound to have a “Her Majesty’s” skew. There will mostly likely be questions about the All-Blacks and parliamentary procedure and BBC World News that leave American attendees clueless.

Seventh, I frequently make fun of my students for speaking English with Kiwi accents. Then I explain to them the American style of pronunciation—and thus the correct style as far as my class goes. All in good fun, of course. Except for the word “water”; the Kiwi version, “whoa-tuh”, really freaks me out. 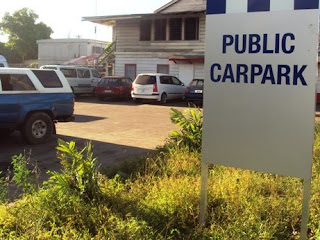 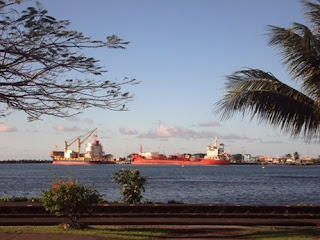 Red ships in the bay. 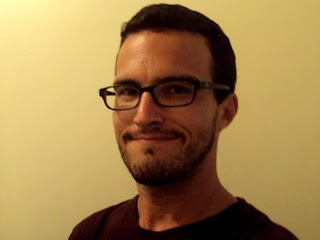 I've been bored lately. So I grew a "beard". It's actually a better beard than any other "beard" I've grown before, but it still necessitates quotation marks. It's a bit taboo to grow facial hair on your chin in Samoa, so I figured I would keep it until Amanda came or until someone at school said something. And today someone at school casually mentioned I should shave. So I am.

I'm impressed with the "beard." Papa would have been proud! It's too bad Amanda won't get to see it in real life.

and grow your beard, you're a grown man and Jesus had one.

why is it that Americans always think we spell things funny and we have funny words for things......i like Kiwis (the human kind)

have you ever seen Whale Rider? it's a movie about a Maori family, specifically a little girl. I LOVE THEIR ACCENTS!