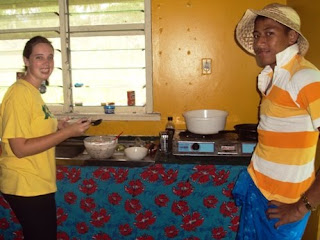 I had big plans for Sunday. I had papers to grade, but I also had a whole lot of nothing to do. And between heading out to the village and celebrating Blakey’s birthday this weekend and doing the 64-mile relay and celebrating Cale’s birthday next weekend, I don’t have much in the way of low-key going on, and the plan for yesterday was to sit around in my boxers and read my book.

At Blakey’s birthday party Saturday evening, someone was opening a bottle of Coke, and I rustled around in my pocket to find my keychain. And it wasn’t there. A bunch of people were staying at Blakey’s, and since in light of the fact I had no house key, it seemed pointless to go home. So I stayed too.

I’m usually pretty good about checking my pocket for my keys before I leave my house, and I tend to realize I’ve locked myself out within moments of the door closing. But Saturday I had no idea. This seemed suspect.

Spending Sunday at Blakey’s was lots of fun, but it wasn’t the same as sitting in the comfort of my own space. I managed to watch 14 episodes of “30 Rock”, and I also helped Blakey and one of her students, Francis, make oka.

Oka consists of diced tuna steak in coconut milk mixed with cucumber, tomato, pepper, and onion. Blakey cut up the fish. Francis provided the coconut cream. I chopped vegetables. I chopped 2 green peppers and one red pepper. Without washing the cutting board, I started in on the cucumber. It wasn’t until the end of the cucumber that my fingertips started to burn.

And holy hell, did they burn. My guess is the cucumber soaked up the red pepper—the red peppers from the market are notorious for their potency—and the salty cucumber juice allowed my fingers to osmote the fiery solution. It throbbed. It looked like second-degree burns. It felt like I was holding my fingers up to a pot that was cooking on the stove.

As the day wore on, it passed. I left Blakey’s around 5:30 p.m. as the sun was starting to get lower in the sky. I figured if I stayed at the Peace Corps hostel, I’d be close to school and close to the locksmith.

While the computers at the hostel are new and flossy, they are ridiculously protected and monitored. This is all to say that I couldn’t watch any of the fun stuff on the community hard drive, and instead had to opt for whatever DVD I could find. This turned out to be “The Queen” starring Helen Mirren, which I saw back when it first came out, and turned out to be just as good the second time. I recommend it.

I prefaced the movie with a dinner of ramen, hastily prepared in the hostel’s microwave. My stomach was none too happy about this. In fact, my stomach spent the rest of the evening, and much of the morning reeling and trying to expel nastiness whatever way it could.

I showed up to school feeling haggard, and not looking much better. My fingertips were finally starting to heal, but my stomach was still in knots. My shirt, the same one I’d been wearing since Saturday, had a small teriyaki stain just below the collar. PCV Benj lent me an ’ie faitaga. But I showed up! And I taught all my classes. And I finally got a hold of the locksmith. I told him where I lived and he said, “Oh! Are you the Peace Corps? I’ve opened your door before.”

He showed up at interval and opened my door with the quickness. I had less cash than he wanted, but I offered him a pumpkin to make up the difference, and he happily accepted.

I changed my shirt, washed my feet, and grabbed my stupid keys, rushing back out the door to make it to the teachers’ lounge for muffins and tea. Any ordeal that ends in muffins and tea couldn’t have been all that bad.

I hope your weekend was spontaneous. Pictures below. 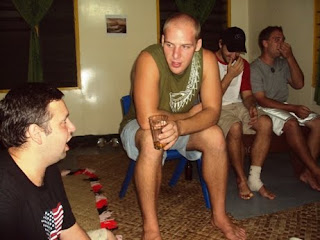 Koa and Dan at Blakey's party. 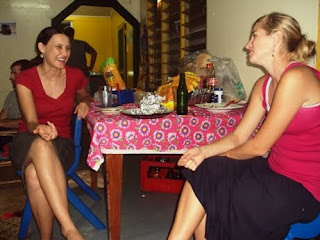 K8 and Erin at Blakey's party. 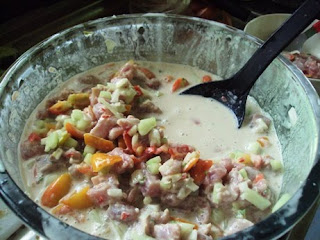 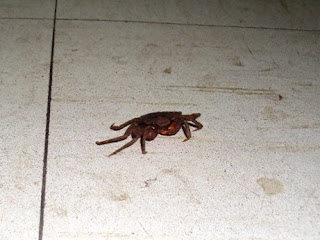 I thought this was a cockroach, but it turns out the Peace Corps office has a crab infestation. Weird.

That oka was so good! I'm glad you forgot your keys.

i wish i could offer pumpkins at my disposal if i ever get locked out.