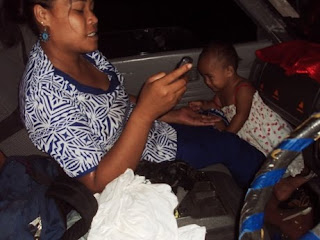 Ever since Paul and I waited for a bus that never came and the whole rolling out of the red carpet for my parents, I’ve decided to wait to notify my family I am coming to visit until I am sitting on a bus waiting to roll out. This practice is still under consideration for the long term use, and it’s so far seen mixed results. Case in point was yesterday when the bus dropped me off at my family’s house yesterday afternoon, and no one was home.

The outhouse was unlocked (thank goodness), and it didn’t take too long to find them. It turns out they were down the street at Phil’s family’s house. I got a hold of Asolima, and she told me to walk on over. So I did, but they met me in the van before I could reach Phil’s house. The door opened and a clown car of formally dressed Samoan faces greeted me. I was wearing a Tommy Sport t-shirt and my grungiest pair of khaki shorts.

It took me about 20 minutes to ascertain where we were going—a funeral—and by the time I figured this out, we were there. My nasty appearance wasn’t an issue because it turned out we weren’t going to the church portion of the funeral; we were only there for the fa’alavelave portion.

Fa’alavelave is a debt one is obligated to pay when something happens in a friend or family member’s life that interferes with normal activity; e.g. wedding, funeral, canoe lost at sea, etc. From what I could see, the ritual was pretty much what you’d expect. We can explore my ambivalence to the overarching idea of the concept in another post.

In any case, I could only see what was going on from far away because I spent the entire time hanging out in the van with the baby. Asolima was there most of the time too. She spent quite a bit of time playing Nature Park on my phone and I played Tetris on hers, which was awesome.

What was not awesome was when we were chatting later in the night and I had three mosquitoes land on the back of my neck at the same time. I brushed them away. Then three more landed on the back of my elbow. I freaked out a little, and then I realized they weren’t mosquitoes. Asolima said, “Oh it’s a—what’s the word?”

So I stood outside the van for the rest of our wait. There wasn’t too much left, and after a while, family started pouring out carrying obligatory fa’alavelave white styrofoam boxes. They piled back in the van, and I sat on the console facing backwards on the way home because we ran out of seatbelts.

We went to Jordan’s family’s house to divvy up the takeout meals, and then headed home.

There was talk of checking out the Catholic siva, but it was getting late.

I hope you’re showing up unannounced from time to time... just to keep them on their toes. Pictures below. 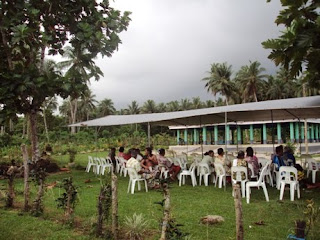 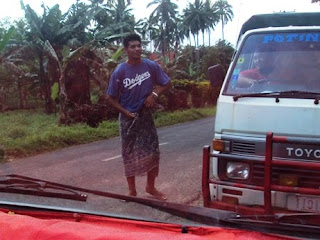 I was poorly dressed, but not nearly as much as this guy. Dodgers. What a jerk. 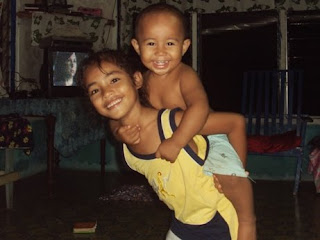 This picture is cute. 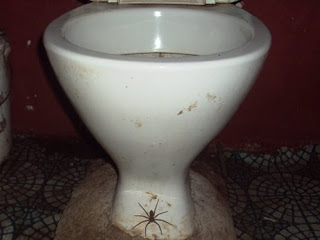 This spider was in the outhouse last night. I held it.

I love the pictures of the kids. They are SO cute.

Cockroaches are not cool. How dare you write that so close to my visit.

That was definitely very funny! The Dodgers guy probably does not know what/who Dodgers is... most ppl in the islands receive hand-me-downs or second-hand-shop items. I once saw a guy wearing a t-shirt for women's cervical cancer program! Now that was lol.

You'd probably know this by now, but you were probably going to take a si'i to the dead person's family.

A si'i is a formal presentation of 'cultural gifts' (for want of a better term) to the family of the deceased. The most important part is the fine mats. Although you didn't mention the presence of fine mats, so ...umm, a si'i isn't really a si'i without fine mats. Also includes money and maybe a sua (specific formal presentation to an individual within that family). However, the fine mats are worth more than money.

The family of the deceased reciprocates with food and maybe fine mats of their own (usually just returning the fine mat the visitors gave). It all depends.

It would've been a very good way for you to witness an important aspect of Samoan culture first up. All you really needed was an ie lavalava to enter the house.