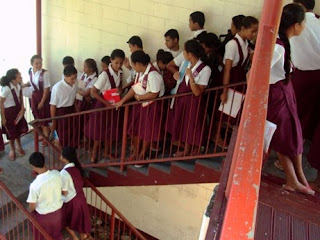 I’m a big believer in independent experiential learning because it means I get to play Hearts during class occasionally. As I get farther into the school year, I’ve noticed the pace of teaching is reliant on three factors: covering all the curriculum, the ability of the students to take in the knowledge, and my ability to dispense it. I’ve noticed that third one gets a little hairy when I have to stand in front of a classroom too often. So to ease back in after the Swine Flu break, I’ve been giving all the year 9s and10s the entire period to type whatever they want in Microsoft Word.

RPCV Dylan implemented this strategy during afterschool computer lab hours. Students could only use computers to work on projects within the Microsoft Office Suite. I don’t necessarily agree with this rule for open computer time—I actually do think there’s inherent benefit in allowing my kids to play godawful music in Windows Media Player—but the MS Office iron curtain works well for an in-class assignment.

At the beginning of the class, I’ve told them they can type whatever they want, and then I’ve suggested:I’ve noticed that most pay no attention to these instructions because they still look at me blankly when I tell them to get started.

I guess a blank stare is in order though. This assignment is somewhat similar to locking someone in a Kinko’s for the evening. Sure, there are tools for doing stuff, but the tools are a little useless when there’s no necessity involved. But eventually you find some way to pass the time.

Lili and I showed up for a movie early once, and we ended up playing at Kinko’s putting our friends’ faces on different denominations of currency. Sounds about right for bored American high school students, but what about Samoan kids?

The things they write are the most entertaining part of the assignment. Besides the Hearts, of course. The most popular song is writing out the words to Beyonce’s version of “Ave Maria”. Also popular is the lyrics to Kelly Clarkson’s “My Life Would Suck without You”. Nearly everything is written with the caps lock on.

DEAR MUM ! THANK GOD THAT YOU ARE FINE AND IN GOOD HEATH … I WOULD LIKE TO SAY HAPPY BIRTHDAY TO YOU WE PRAY THAT THE LORD WILL BLESS YOU AND GIVE YOU MORE DAYS TO BE WITH US LOTS OF LOVE AND KISSES FROM ALL YOUR FAMILY AND FRIENDS ESPECIALLY YOUR BELOVED DAUGHTER It’s be so nice If could nothing fill so lonely It’s be so nice If I can smicky for moment WHEN I SEE THE MOON I THINK OF YOU THE FRIENDSHIP FOEV I write to you because of the day that I miss your birthday I am very sorry about it So I will try to make it up to you I love you baby and happy birthday If you get the package that I sent to you, If get it you will be thanking Forgive me Forgive me For having not done enough To try to save your life And accepting too readily The finaly of your cancerous fate Forgive me for having not thanked you For being a great mother And for not ntelling you That I loved you Before you died I hope That in passing on Your gift of love You will find it in your heart Wherever you may be watching from To forgive me

Heavy stuff, huh? But fascinating, right? I thought so. I think we might do the same thing in class next week. 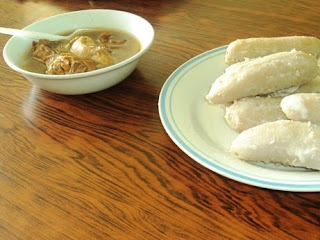 We had chicken adobo for lunch. I asked Vaifale what it's called in Samoan. He said, "Soup." 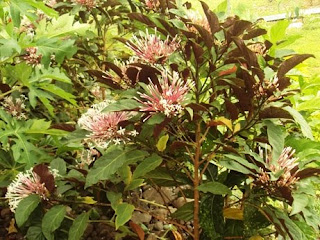 These flowers are in my front yard. I didn't notice they were in bloom until today.

Thanks for making me sob.

That last one was a heartbreaker. I second Amanda - thanks for making me sob.

Some of the most profound things come from children when we give the freedom to express themselves. It made me think of my mom and how much I would have liked to have changed some things in her final days. I can't stop sobbing...