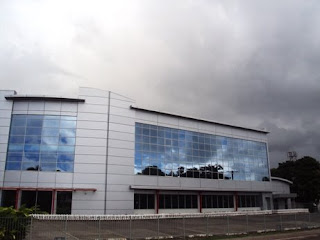 Rumors began to surface Thursday. People with radio and TV access were hearing reports that the school closings would be extended another week. Since the beginning of last week—a week during which most schools were closed—cases of Swine Flu in Samoa increased 100%, which seems like dramatic number until you hear that the raw number of cases jumped from 40 to 80, which in a country of 190,000 is still relatively small.

That said, it has become official, parliament has passed a resolution: all schools in Samoa will be closed for the upcoming week. In fact, the resolution this time is apparently stronger than last week’s; whereas the previous resolution was simply a recommendation, this week’s is an order.

This is bittersweet. In addition to the reasons already stated in Friday’s post…

The combined CAT for year 13s, which is a pretty huge deal, is still scheduled for August 18. This means by the time we get back next Tuesday—next Monday is Father’s Day observed—we will only have 6 school days to prepare. And I can assure you my kids need a lot more than 6 more school days to prepare for that test.

And that’s only the computer CAT! The year 12s and 13s have a slew of other Individual Assessments (IAs) and CATs in their other subjects. Maengi, my next-door neighbor, held chemistry and biology classes for her year 13s on the 3 days last week when we didn’t have school. Smart move on her part. It’s unclear if they will still come to class tomorrow since the government mandate states that all schools are required to close.

And if they do show up for class tomorrow, it’s unclear how much overlap there will be with my computer class. If I can start having my year 13s show up, that would be great. So I guess we’ll see.

At dinner on Thursday night, as rumors were spreading and we were slowly realizing the impact of another school-less week, Sara mentioned that the Ministry of Education might be willing to postpone the CAT for the year 13s. It was originally scheduled for August 27, but they agreed to move it up to the 18th because of school breaks that conflicted. Now the original date is looking a lot better.

So it appears it will be another week of laying low, mild efforts to clean the house, and getting a whole lot of reading done. Maybe go on a bike ride? Write a letter? Do some gardening? Sneak into a resort and hang out at the pool? We’ll see… 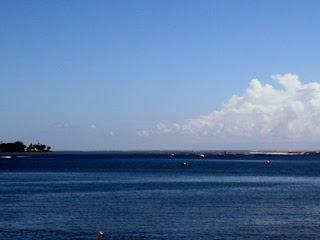 If you look really hard at the horizon, you can see the island off the coast of Apia Harbor that only surfaces when the tide is out. 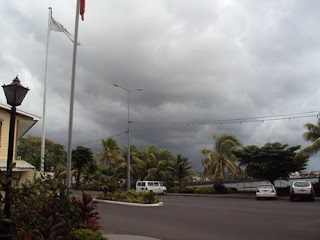 As is reflected (literally) in the picture up top, the sky was quite bi-polar today. From this angle, the clouds were ominous. 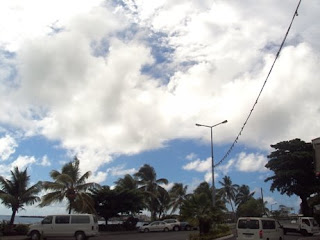 From this angle (that's the same light post, and this picture was taken seconds after the one above), the clouds are blithe and sunny.

wow! school cancellations for 2 wks. because of swine flu...very fascinating to see how life differs in Samoa with similar world events.