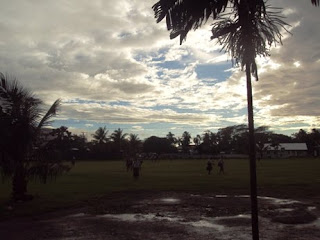 I remember senior year of high school, my economics teacher, Ms. Critz, in an attempt to introduce us to the exactness of economics, gave us the following assignment: based on our morning routine—considering all of the factors of teeth brushing, breakfast eating, and commuting—what was the absolute latest time we needed to wake up in the morning to make it to school on time? I believe my answer was one of the latest times in the class.

When it comes down to getting up in the morning, everything comes down to one simple opportunity cost decision: I could get up earlier, or I could sleep. I choose the latter almost always. Sleep trumps coffee, so I rarely drink it. Sleep trumps showering, so I have to do it the night before. Sleep trumps lesson-planning, so I sometimes have to wing it for the day.

I wish I needed coffee a little more. It would help make me an early riser, I think. I love coffee, particularly in the morning, but I rarely get around to drinking it here. As much as I’m a night owl, I’ve always appreciated the freshness of the morning: the dew’s reflection of the sun, the crisp cool air, breakfast. On my NPR podcasts they occasionally play the theme music to “Morning Edition,” and even that hits the spot. But part of the allure of these pleasures comes from how rarely I experience them.

Part of the disincentive of waking up early in Samoa is morning barely feels like morning. It gets hot so early, waking up at 7:00 a.m. feels like waking up in the middle of the day after a particularly long nap. It’s already sunny and hot and bright. So my reaction to this is I may as well get up later because it’s going to be the same either way. Samoa’s reaction tends to be the opposite; many households tend to wake before dawn to start morning rituals.

On the morning we arrived in country, we got out of the airport somewhere around 6:30 a.m., and the road was packed with buses full of people. No one wants to work in the middle of the day when it’s hot as hell, so people tend to head to work earlier, which means they get up even earlier. Living in the host village, my family would wake up and blare the radio starting well before dawn. I’m a deep sleeper. I could take it, but there’s only so much remixed Akon one can sleep through.

Now that I’m at school, back in the swing of a somewhat normal job, I’m back to the Ms. Critz plan of sleeping until I absolutely have to get up. This means such a late start that I can almost always hear students out my window by the time I get out of bed. I sometimes hear the bell ring for homeroom while I’m brushing my teeth Getting ready for the day is the same whirlwind it’s always been, scrambling to take care of hygiene and madly packing for the day before sprinting out the door.

But I’ve never been late to first period. And after 27 years I’ve begun to master the whirlwind. I do miss coffee though—just not enough to do anything about it.

I hope you’re up. Pictures below. 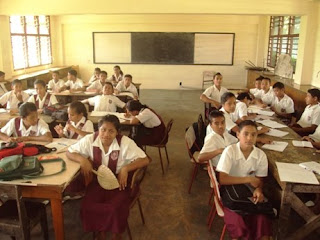 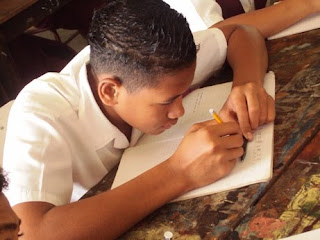 This kid was using his pen as a straight-edge to draw the diagram I drew on the board, which is shown below. 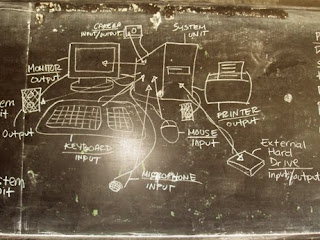 No straight-edge is going to help de-mystify this mess, kiddo.

ha that drawing is awesome. :)

Hey Matt,
Enjoy hearing about your experiences. Wish I was there for the Teuila Festival.
The Samoan Tourism Calendar usually has events printed on it.
There is usually fire dancing competitions and Tattooing demonstrations.
Ia manuia lou vaiaso.
Soifua