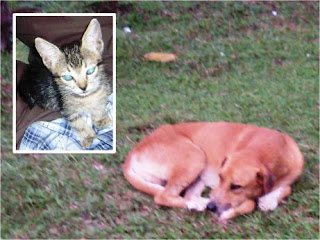 My year 13s took a beating from the Common Assessment Task this morning. I gave help during the test and offered en- couragement and warned them about how much time was left, and despite all this, a couple of them spent the entire time foundering in Microsoft Access, desperately trying to figure out queries. This is frustrating because I feel like my year 12s would have done much better on this test. So what’s wrong with my year 13s?

Admittedly, the bar is set pretty high, and with good reason. Most students in Samoa don’t make it to year 13. Year 13 is also known as the university preparatory year, and it tends to be reserved for the more elite students. My school has roughly 100 year 12 students and only 35 year 13 students. They are the cream of the crop, the cat’s meow, the bee’s knees. But they could have fooled me this morning.

The Swine Flu break was clearly a factor. We’ve been rushed the past week, and they didn’t show up on Friday because of a job fair at the National University. And the test is awfully difficult. And 2 of them have never taken a computer class before. But those 2 scored in the top 3!

I blame myself, but only partially. Education is a 2-way street, and there’s only so much I can do. I’d feel worse if my year 12s were showing the same results. But they’re not.

From the beginning of the year, my year 13s have taken a cautious, skeptical approach to the computer. They get confused easily, they tend to cling to doing the things they know well, and they do those things over and over rather than exploring new territory or learning new stuff.

My year 12s are the opposite. They dive in head first. They tuck their chin and immerse themselves. They’re intuitive in maneuvering the computer, they notice patterns in the interface, they occupy themselves exploring extra-curricular stuff like Windows Media Player and Microsoft Encarta.

Why is this? Are the year 13s past ripe? Have they crossed life’s threshold through which computers become baffling, insolent, wearisome machines? Year 12s can be introduced to computers, but year 13s may as well be put out to pasture? Perhaps.

But now that I think about it, maybe it has more to do with that drop-off from year 12 to year 13. Maybe the ones who make it through are the ones who follow directions and are not distracted by fleeting curiosity. Maybe they’re the heady ones who can regurgitate what they’ve been told and have no interest in straying from that line.

The South Pacific Board of Education’s year 13 computer studies curriculum has an element of theory, but is mostly practical. Success doesn’t come from rote memorization or applying the same concepts over and over. It’s tangible.

I like to think that next year’s class of year 13s will come in prepared and will ace next year’s CAT. But perhaps all of the ones who would do really well will have noticed something shiny off in the distance, and will have left school to pursue new horizons.

I hope you’re curious. I promise to not talk about any CAT again until next year. Pictures below. 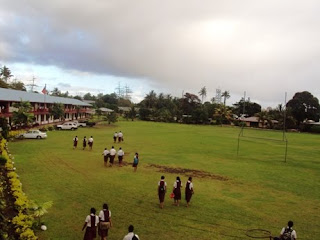 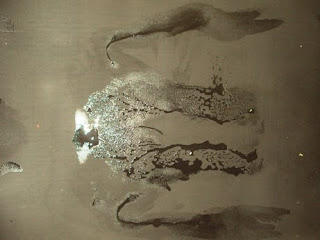 I did sit-ups after I went running tonight. Exercise in Samoa can be a sweaty affair. As you can see, there are pools of sitting sweat.
Posted by Matthew at 8:00 PM

Your blog posting is timely for me. I'm reading 'Shop Class as Soulcraft' by Matthew Crawford, a professor, think-tank fellow and over-educated motorcycle shop owner. The book's premise is that our creative thinking and motor skills have been lost or at least eroded significantly in our modern world. I think of your USC buddy in his hi-tech job designing circuits for something where it has little impact on his life, other than a great salary. Or even me and my telecom RFPs. He and I both have good, technical jobs, but we aren't allowed to color outside the lines - not that I would know how to do so. Perhaps your year 13 students have seen what's on the 'other side' and really don't want or care to go there because it holds no interest for them, or they're scared, or don't know how to apply the knowledge to their advantage. Perhaps they don't want to be an MS Excel/Access/Word jockey pounding on a keyboard from 9 to 5. And you won't know how much joi de vivre they had because you didn't have them for their year 12. Perhaps that's why you too are searching and pondering - in Samoa. The joke is true that in college we learn a lot of information but we don't learn to think and use it. Am I sinking into one of your prior blogs here?
It's time to take out the wrenches and work on the little red Honda...