Saturday in the Classroom 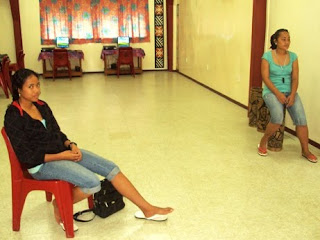 One of the joys of living on campus is occasionally I get to be woken up by students knocking on my door. I scheduled class for 9:30 a.m., but since half of them (i.e. 3 of them) were here by 9:15, they figured they could come get me and we’d start early. But I had scheduled class for 9:30 because I intended to sleep until 9:27. To stop the knocking I peeked my sleepy bedhead out the door and gave them a nod of acknowledgement.

They were not expecting this. I didn’t have glasses on yet, but I felt their shock through the blur. “Did you just wake up?” Filifili asked in Samoan.

I pretended I didn’t hear the question. “5 minutes.” I finally said. And then I closed the door.

Saturday classes have a fun, casual energy; there no time constraints, no uniforms, no bells. But the urgency of Tuesday’s CAT brought stress to the day, and it was hard to not feel like we were in a rush.

But we are in a rush. The CAT is really hard. It’s hard to the point I didn’t know how to do parts of it. It asks the student to use the “Totals” function in building a Microsoft Access query, which I don’t know how to do. PCV Sara had to explain it to me last night. And since I don’t have Access on my laptop, I didn’t get to actually try it until I was showing the class how to do it. From what the little student feedback I garnered, none of my kids could tell that I was doing it for the first time as I was teaching it to them.

The CAT itself is a long test involving multiple programs and importing data from one to the other. It’s a daunting set of tasks and going through it step-by-step is just as daunting. In this respect, it was very good that I only have 6 kids in the class (only 5 showed up this morning. Good luck on Tuesday, Sione.). I spent the first hour walking from computer to computer showing step by step how to do things.

The basic lesson structure is to explain something, demonstrate it, do it again as a class, and then have students do it themselves independently. Working through the language barrier with highly conceptual data concepts, this process has to be even more gradual.

Eventually one student figures out a concept, and she can explain to others how to do it, and she can explain it to them in Samoan. The tough part can be getting a student to help others without doing the work for them. I can trust my year 13 student Tui to do this, but my year 11 Junior—who is brilliantly gifted—loves the glory of doing other people’s work.

Tui figured it out today. And Marie and Kate and Sisigafua weren’t far behind. Sinaumea, who didn’t show up until 10:30, lagged. I wouldn’t let anyone leave until they were all finished. Marie was cranky about this.

But we got through it, kicking and screaming. So hopefully their work on Tuesday will justify this morning. Although, why would this morning need justification? What could be a better way to spend 3 hours on a Saturday morning? 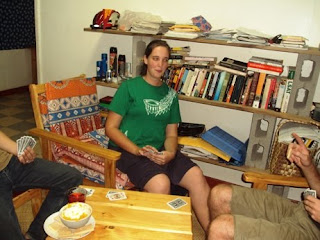 Good instruction is built on the premise of gradual release. I (the teacher) do while you (the student) watch. Then we do it together I do you help. Next step: You do, I help and finally You do I watch. The biggest mistake most teachers make is going from Modeling (I do you watch) directly to the Independent (You do I watch) with no shared experience in between.
That concludes our professional development for the day...

Wow, what Debbie describes is exactly how I handle my DPT physical therapy students when teaching them manual therapy techniques. I just found that it works best that way...nice to see that someone else thinks so.
With surgeons, it is "Watch one, do one, teach one". They skip a few steps it seems.