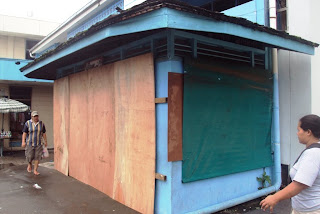 Down here in the Tropic of Capricorn, we get our fair share of torrential rain. Lighnting storms are amazing here because in the middle of the Pacific there’s very little obstruction or light pollution. Even from low elevation, flashes of lightning from tens of miles away can fill the night sky. Occasionally the rain is so strong it feel s as though my house is under a waterfall and the roof might cave in at any moment.

So when teachers showed up to school yesterday looking rattled and urgent—warnings about cyclone Rene have been all over TV and radio—I mentally prepared for a big one. We canceled school after Interval, and I brewed up a couple gallons of water in the filter and hunkered down for the night.

There were intermittent rain showers. I received a text from another PCV asking if I was interested in going to dinner, but in light of the weather, I decided to stay home.

In the end, the cat and I laid on the couch and watched the Coen Brothers’ new Best Picture nominee, “A Serious Man.” In the final shot of the movie (I swear I’m not spoiling anything) a boy stare into a tornado in the distance. It was the only cyclone we saw all night.

In Apia, at least, the wind and the rain were no stronger than usual. In fact, I’d say they were calmer than usual. My tap water, which automatically shuts off during times of extreme rainfall, stayed on all night.

Admittedly, I’m on the north side of Upolu, which was the lee side. I hear the south side of the island felt the effects of cyclone Rene more strongly, but I’ve heard no reports of any substantial damage. It sounds like some families boarded up windows and moved up to the maumaga, but all of it was precautionary.

I’m all in favor of better-safe-than-sorry, but I can’t help feeling a little disappointed, if only for the storms inability to meet expectations. The south side has seen more than enough natural disaster, and I'm very happy they were spared.

Telling Luisa about it this afternoon I said, “The whole thing was overblown.”

I hope you're well. Picture below. 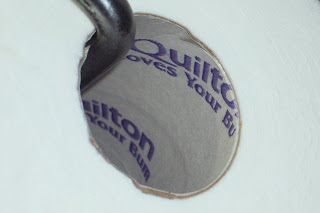 I noticed the brand of toilet tissue used at Aggie Grey's is Quilton, which I'd never heard of. Mostly I was amused by their tagline, "Quilton loves your bum."

Our weather has also been disappointingly overblown. All the big east coast storms have failed to make it to Boston... the most recent one finally did, and we had all this "blizzard" talk, and then we got an inch or two of snow. boo. So yes, it's good, blah blah, but I totally understand the letdown when you gear up for a storm that never appears.