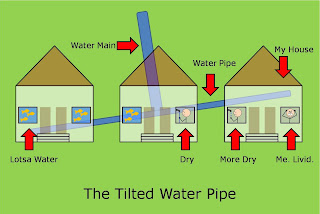 I just spent 45 minutes in the shower. The water was cold, and for most the time, it wasn’t on. For the first 5 minutes, I had a solid stream, and the next 40 minutes was long periods of waiting and then obnoxiously short spurts of water. There are many aggravating aspects of my life here in Samoa, but none of them comes close to making me as angry as the stupid water does. I mean, really. Come on.

I’ve heard my next-door neighbor Maengi complain about it too, and her theory is the same as mine. In fact, she stated things so matter-of-factly I assume they’re true. The water pipe that runs from house to house on our school’s compound slants for some reason. According to Maengi, who’s lived her for 8 years, it wasn’t always like this but sometime in the not-too-distant past, the people at the other end moved the pipe to the ground which caused a slant. I’ve never seen the actual pipe in question, but stay with me. The pipe is lower to the ground on their side and the water main connects mid-slant. I’m at the very end of the high side, which means if anyone else in the whole compound turns on their water, mine turns off. Click here or on the picture up top to see the diagram up close.

I’ve talked about water problems before, and it’s absolutely worth point out that Blakey and Briony and Jenny 80 are all almost completely without water at all times. That is a lousy situation, and I am grateful for my running water. But at least they have reason to adapt.

The thing that’s so irritating about my situation is when I stepped into the shower, there was a steady stream. If there was no water, I’d make arrangements to shower somewhere else. But instead I end up standing in my stupid shower for 40 minutes like a fool.

I’m not sure the aggravation of an extremely intermittent shower is something you can relate to unless you’ve experienced it firsthand. Try it next time you’re in the shower. Once you’ve got the shampoo lathered in your hair—maybe even mid-rinse—turn off the water. And then wait.

There’s nothing to do during shower waiting. You can’t bring a book or a crossword. You can’t play games on your cell phone. Sure, you can think about what to make for dinner or go over mental notes on what you’re going to teach tomorrow. But you know, all of those things are great to think about WHILE THE WATER IS ON.

I think that’s why it’s so aggravating: if I’m going to have leisure thinking time, I’d prefer not to be naked and sopping and lathered. I'd rather not wipe the soap out of my eyes with soapy hands.  I'd rather not contemplate the shower curtain hooks for lack of anything better to do.  I’d rather not have the mental debate about whether or not to lean on the mildew-laden walls of my shower.

I reached my capacity for this nonsense at 40 minutes. I had conditioner in my hair, and for some absurd reason, my bathroom sink worked. So I rinsed my hair as best I could in my tiny tiny sink.

And I swear this is true: As soon as I turned off the bathroom sink, the water in the shower came back on. I’d left the nozzle open, and the splatter of the water echoed off the shower walls. 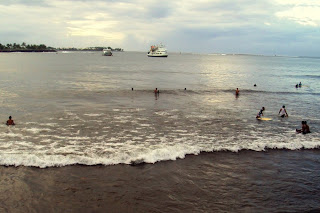 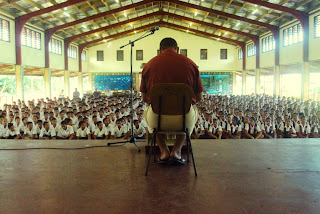 I sat directly behind the speaker at this morning's assembly.
Posted by Matthew at 7:00 PM

As far as we could tell, someone was actively turning our water off randomly. We had a main in our front lawn with a shut off knob. Often we would awaken to discover that there was no water or go to the sink in the middle of the day and there would be no water. Sometimes everyone's water was off, but more often than not we could remedy the situation by going out into the front lawn and turning the knob, thus turning our water back on. The only explanation we could come up with was that someone (i am looking at you neighbor children) was frequently coming around and turning our water off. Thankfully, I think it only happened once mid-shower.

I always kept a bucket in the shower, storing water should the notoriously unreliable water supply gets worse. I recommend doing the same and keeping it filled constantly when the tap is running as insurance.

Plus when you add Hot boiling water to your water bucket, Voila! instant hot shower.

Waaa, waaa, waaa. You volunteers living in Apia are so spoiled. As Sue said, how hard is it to keep a bucket of water in the shower. Stop complaining!