I can play piano by ear—I’m not talking Mozart or Dave Brubeck, but I can instinctively bang out a simple melody line. I only bring this up because my singing voice is so terrible it was sometimes unclear to my family and others whether I knew the tune of a particular song. They’d shake their heads and tell me I was way off, but then I’d play the notes I thought I was singing and from that it became clear I just couldn’t sing worth a dime. These memories came rushing back this afternoon when I sang a song with my English class.

And yet singing was my idea. I took the idea straight from my high school Spanish classes with Señor Martín. See, my English class is a bit of a conundrum: they’re stuck somewhere between TESL and TOEFL. Until recently, I never understood the difference between English as a Second Language and English as a Foreign Language. Now I see there’s a whole spectrum there.

English is prevalent in Samoa; street signs, television, shop names, and newspapers are all primarily written in English. In that sense, students here speak English as a second language. But for my year 10s—essentially the lowest scorers from last year’s Year 9 class—many are so immersed in a bubble of Samoan, English almost becomes more of a foreign language. I’m not berating them or calling them inferior, but this distinction in their exposure to English commands a different style of teaching in the classroom.

So I feel like in designing lesson plans, I need to draw a little less on my own experience in English classes and a little more on my experiences in Spanish and Samoan classes. And my favorite part of both of those was singing. So when I made my lesson plan for today, I scheduled a song.

In my days in Señor Martín class, he would print out the lyrics to a Los Lobos song and then play it for us on the stereo and we’d sing along. Before walking into the classroom this afternoon, I hadn’t considered the absence of the song sheets and the stereo. But everything about my job is improvising. So I wrote the lyrics on the board and had the students copy them into their notebooks.

And then it came time for the song.

Back in Fausaga when Phil and I sang with the EFKS choir during training, the choir director would teach new songs through a painstaking process of him singing each part over and over. Very few people know how to read sheet music so aural is essentially the only way to go. I thought the whole thing was ridiculous. Until today.

I didn’t really consider the gravity of this until the lyrics were on the board. In the absence of a stereo and/or musical instruments, what other way is there to teach the melody except to sing it?

Now, when I said I’d written a lesson plan for today, I kinda lied. I thought about singing, but I never thought about an actual song. I brought my laptop to the lab today, so in the last moments before I headed over to teach English, I consulted iTunes for a song to teach. In the end I decided on Peter, Paul, and Mary’s “Early in the Morning” because it’s a relatively straightforward folk song, and in this country, the slightly Christian slant only makes it more perfect.

Little did I realize the song requires more of a range than “The Star-Spangled Banner.”

Teaching it to the class, I’d start the first line singing in my lowest register possible, and still had to resort to voice-crackingly high notes that I simply could not reach. Students, of course, found this hilarious, which was fine except it was difficult to teach them when they were doubled over.

If the lesson was successful, it was only because singing is such a part of the culture here. For one, though I was unable to sing the melody, my kids were impressively able to intuit it. Secondly, their voices are in great shape, and they’re ready and willing to belt out anything at the top of their lungs. In fact, they were so loud I felt a little guilty for disrupting classes on either side of me. Then again, breaking into song in the middle of the day is nothing new.

All in all, the whole thing wasn’t so bad, though next time it might be better to bring a piano. 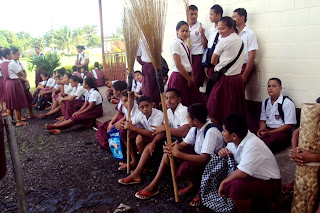 What are you talking about that you can't sing worth a dime? You hit those high notes like no other!!

Your sister is very funny. It's too bad you don't have a keyboard in Samoa. Oh wait, you do!

What an inspring way to teach English to the lower level classes. But I think you should ditch the folk music and go straight for the popular hits that half of the kids would already be memorising from the radio. You can start your own Glee club and really rock that Eanglish class.

Who is leaving comments as Sue Sylvester?! How fabulous.