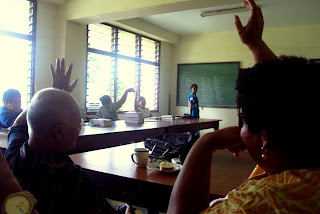 I’ve been waiting a year for today. Last year I was completely in the dark. I couldn’t figure out what in the hell was going on until it was too late. Yet even if I had completely understood what was happening, I wouldn’t have been familiar with any of the students involved, and it still wouldn’t have been interesting. But now I’ve spent an entire year familiarizing myself with many of the students, so when we elected the student prefects and Head Boy and Head Girl positions this afternoon, I had my ballot ready.

Whenever the subject arises, I’m quick to tell people I fell into my political science degree. I was undeclared until the second half of my junior year of college, and even then, I only declared poli sci because USC was sending me angry letters urging me to do so. But really, it was only too fitting a major. I find politics thrilling from the American presidential election in 2008 to the small-time student council voting in middle school. Today’s elections fit right in.

The farce of the entire gesture is the teachers—rather than the students—elect the student leaders, but I’ve accepted this with the “When in Rome” reasoning. I also like this system because it means I get a vote.

While there are criteria of eligibility, the whole thing is essentially a popularity contest. The process worked like this: We sat around calling out names of students we thought were qualified to be prefects. We chose girls first. We came up with roughly 30 names. Then we voted on each name. I could vote for as many people as I wanted. The top 24 vote-getters became prefects.

I didn’t teach long enough in Oakland to get close enough with any of the other teachers that I could gossip about students. When I was a student I remember I occasionally heard teachers talking about gossip they’d heard in the staff lounge. But I can’t imagine anything among staff at my high school being as blatant as today’s prefect election.

I nominated a couple of my kids, and with some exceptions, mostly voted for students who are actually in my class. There was no formal nomination process; teachers simply shouted names. I must have shouted Peter’s name 15 times, and it still wasn’t up on the board. “You sure you like Peter?” asked Papalii, the teacher sitting next to me.

“Simona doesn’t like him,” she replied, gesturing across the room. Another teacher, Simona, had been quietly vetoing my nominations. She was nearer to the chalkboard, and all politics are local.

But eventually the art teacher backed me up on Peter. “Peter!” he cried.

I had built my coalition. Peter’s nomination went through. When it came time to vote, I made sure the art teacher and Papalii were paying attention. And I may or may not have elbowed Apong. I felt like I had my minivan and I was driving my elderly voters to the polls.

Peter got 8 votes, which was enough to make the top 24. American campaign skills working their magic. If I was staying another year, I’d go door to door. 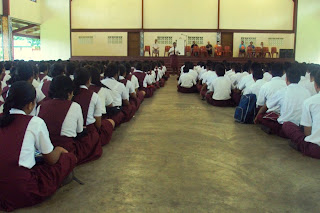 This morning's assembly. I sat at the end of the aisle.

Lol, Go Peter! I think you should study Journalism and write blogs about the places you work/visit. Samoans abroad are going to miss your experiences of our home.

AWESOME day AWESOME blog Matt! oka that was funny, anyhow a toast to ur small win!
:)

Laughed out loud to your "door to door" statement.

Malo a le faamalosi Matt. Maluafou is a better place for your input. Your blog is always interesting and humourous to read. Well done!