A Tail with No End 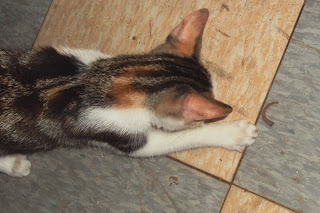 There’s a gecko that hides out behind the Obama placard on my wall. He’s relatively big, and when he runs out from under the placard, the rhythm of his feet on the hollow drywall sounds like thunder. Right now, it’s a cozy Sunday evening, and I may be anthropomorphizing a little, but it looks like he’s got a lady over. In fact, his mojo just set off a fascinating chain of events. The whole thing started when he let out a mating call, and then chased his uo teine under his Obamaroof.

Gecko thunder drives the cat wild. In this case, she comes running out from under one of the chairs, and then perches at the corner end of the wall, trying to find the source.

“Up, Scout. Up,” I say from the couch, pointing to the placard. The cat turns and looks at me. “Up! Up!” She walks around the corner, leaving my sight.

“Fine. Dummy,” I mutter. I go back to what I’m doing, amused by my housemates.

A bigger clatter in the dining room. First the sound of gecko thunder, and then empty thud of the cat slamming into the drywall under her own unchecked momentum. From my spot on the couch, it only takes a slight lean to get a direct line of sight on the cat. She’s clearly in predator mode. I squint. “Did you catch one?!” I ask.

Cats are big into leaving dead animals in prominent places as a means of showing off their work and, in their minds, making the owner proud. Sometimes to amuse myself, I tell the cat I think she’s great, but what I really want is a dead lizard on my chest when I wake up in the morning. Yes. I live alone, and I talk to my cat. Hooray for the Peace Corps lifestyle.

In any case, the geckos in my house are wily, and the poor cat seldom sees action. But from across the room I make out four reptilian claws hanging from her mouth.

Scout’s still technically a kitten, and she seems unsure what to do next. She shakes the gecko a little, but not violently. Finally, she drops him on the floor.

The lizard, thanking his lucky stars, takes off, darting toward the floorboards near the bathroom. The cat, who I admit could use more practice chasing the laser dot, takes off after him.

At this point, they run out of my sight. I grab the camera and run out to the kitchen. At first I’m confused by what I find. Scout definitely has something wriggling in her mouth, but it’s far too small to be the gecko. Whatever it is, she spits it on the floor, where it continues to writhe and squirm.

“What is that?” I ask her. She too is baffled, staring intently at it, cocking her head to the side.

And then I realize what it is: the gecko’s tail. When a gecko’s in a bind, it can detach its tail without being harmed. Sure enough, I spot Scout’s prey motionless on the floor, 6 inches from her.

He isn’t in much danger though because the oblivious cat is transfixed by the wriggling tail. I have to hand it to the gecko—the mere ditching his tail is certainly an evolutionary innovation, but it would have all been for naught without the wriggle. The wriggle mesmerizes the cat.

When the time is right, the gecko takes off across the bathroom floor. Scout loses again.

Now I’m back on the couch, and I can still hear strange noises coming from under the Obama placard. 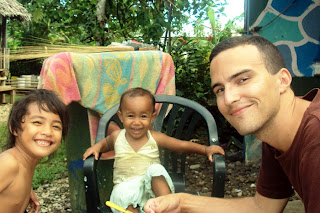 When I arrived on Friday afternoon, I sat down to a tea party with Akanese and Keleme. 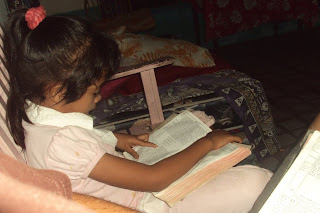 Akanese is starting to read. She's taken over my responsibility as reader of the bible during evening prayer. It's amazing how good she is, but I guess it's amazing how much easier it is to read a phonetic language. Stupid English. 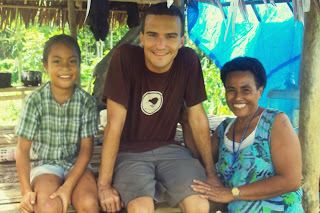 Me with Naku and her daughter. 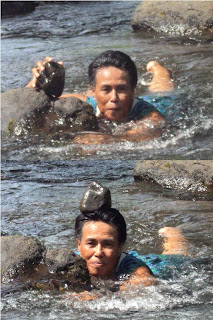 Naku has quite the sense of humor, and posed for the camera with a rock on her head. 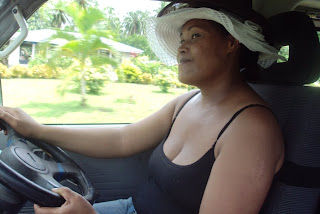 Asolima after the All Clear. 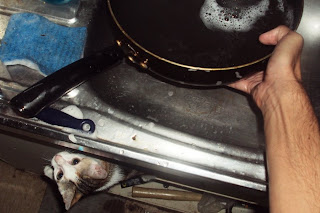 Cat Picture Sunday: Whenever I wash dishes, Scout comes and sits on the shelf underneath the sink, periodically poking her head out.

What an entertaining tale. Maybe your next job should be joining NPR's Dick Gordon on The Story.

and the picture of you and the kids is the cutest thing ever.