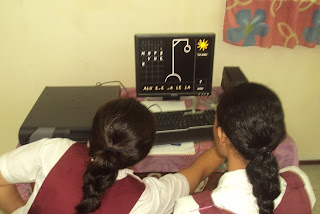 When I was in elementary school, we would trek out to the computer lab once or twice a week to play a host of semi-educational games like “Oregon Trail” and “Number Munchers.” I feel a little like I’m betraying my generation when I say this, but I hated Oregon Trail. The game was always too long to finish in one class period, and as much as it simulated being a Conestoga wagon, I always felt like the “Jennifer has malaria” and “Jennifer has died” updates were morbid and arbitrary.

Back then, all those games were published by one company, the Minnesota Educational Computer Company (MECC). Today in my computer lab, each workstation has a similar collection of programs, but just about all of mine are freeware. For those unfamiliar with the term, Freeware is just what it sounds like: free software. For whatever reason, the people or companies that publish the program make it free to be traded and downloaded over the Internet. Since most of our schools don’t have the funds to pay for licensing, and since software piracy is wrong, the Peace Corps has accumulated a pretty big collection of freeware.

There are a bunch of Linux programs (that I run in Windows) like TuxPaint, TuxMath, and TuxTyping (the TuxSuite, if you will). There’s a Tangrams program. There’s a mouse-training program. There’s the whole OpenOffice Suite (open source programs that mimic Microsoft Office).

And just like at my elementary school growing up, I have a hard time finding the right way to integrate these programs into the curriculum. I teach computers, not English or Math, so there’s no natural place in the annual plan to stop and play math games. So last year they almost never came up. The programs were just names on the Start Menu that made it harder for the kids to find Microsoft Office.

But this year, I figure I’ll try to use them a little more often. I have four year 11 classes, and this year it seems more difficult than last to keep them all on the same page. I’ve seen my 11.1 and 11.4 classes somewhere around 8 times so far. I’ve seen 11.2 once.

Third period this morning I was faced with seeing 11.4. Again. And then a light bulb went off in my head: Freeware. I had them play a program called “Sebran,” which Max swore by. The program is pretty basic, but the coolest thing about it is someone took the time to translate the whole thing into Samoan.

Sebran is actually a collection of simple games—Hang Man, Memory, Typing, Spelling, Mental Math—and Max was right: the kids love it. Honestly, the program is probably intended for fourth graders, but no one seems phased by that.

I’d argue there may have been actual learning going on. As much as the girls spent half the period giggling at Hang Man, they were typing and using the mice and making connections. And I imagine it would be nice to have a simple program in Samoan after dealing with the convoluted English words in Microsoft Office for a year. 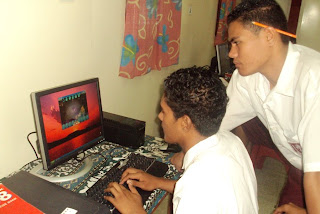 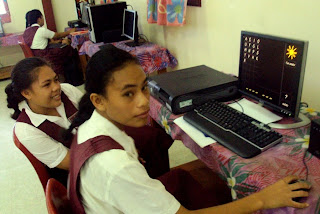 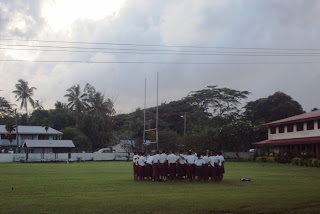 Today was the Rugby Sevens tournament at Apia Park (I had to stay back at school at hold down the fort.). The boys had a big huddle on the field this morning.

I can't believe you hated Oregon Trail!!! The best part was hunting or rafting...

In 7th grade a group of us stumbled across a gender bias in Oregon Trail. If you named the leader of our party with a typically female name, your party could never make it to Oregon. We experimented with this having boys and girls play the game and having them name their leaders with names of both genders. If a boy played under a boy name, he would get farther with more people alive in his party than if he played the name under a girl name. Same with a girl, if she named the leader a boy name she would get farther with fewer deaths.

Later, we set our training bras on fire.

how come jennifer has to die? uncool, man.

number munchers? i thought we stuck those on your computers matt. i unrolled it across phil's PCs and supy's. we gave it this sweet spiky ball or dynamite icon. my kids never played it, and the few times they popped it open they made sure their calc was handy. i also tried to circulate a copy of super munchers, with little success as well.

ps surprised typershark was nowhere in your post. was this mentioned somewhere previously?