The Bond that Unites Us All 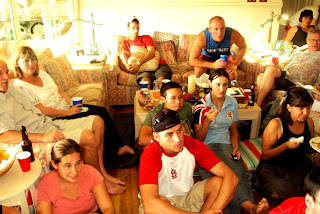 “Let me know when the Peace Corps commercial comes on,” John the Welder said jokingly. We were sitting in the Charge d’Affaires Robin’s living room getting ready for today’s kick-off. The joke emanated from the fact we were watching Superbowl coverage on the Armed Forces Network. Samoa may air the Oscars and the Olympics and the IRF Sevens tournament, but the two TV stations draw the line at American football. So we all crowded into Robin’s house to catch the game on satellite. So we pulled in the same channel that military stationed in American Samoa watch.

Jordan and I were the first ones to arrive at Robin’s, and we staked out out spaces on the sofa, dead center. Settling in, we chatted with American ex-pat Pamela who is visiting Samoa. She admitted to not being a football fan, but was excited to watch the Superbowl for the fanfare and commercialism and “palaver.” And so she was quite disappointed—the first of many other attendees—when we broke it to her we wouldn’t be seeing any of the commercials.

Last year’s Superbowl was very different. For one, we watched the game at a bar in town rather than at the Charge’s. In addition, we watched last year’s game on ESPN Australia, which played commercials of its own. As I recall, commercial breaks simply featured ads for other ESPN programming.

This year, the commercials were a lot more eye-opening. Since the channel is specifically geared toward the military, and since the station is run by the United States government (and therefore contractually prohibited from showing advertisements), commercial breaks are a long line of public service announcements and ads for other AFN programming.

That said, public service announcements can take a lot of different forms. There were a lot of motorcycle safety commercials aimed specifically at Marines, which I thought was strangely specific. There were also a lot of video travel brochures for tiny rural American towns. Of the ones I can remember, there was Needles, California; Carhenge (near Alliance, Nebraska); and Frankenmuth, Michigan (Michigan’s Little Bavaria). There was also a series of segments entitled “Civilians Say the Darnedest Things” in which they’d as people on the street to define obscure military terms like Ship Over and Irish Pennant.

The voice over on one commercial went like this: “It’s the bond that unites us all: The United States… of NASCAR.” That one creeped me out a little.

The commercials for specific TV events listed times for 4 different time zones: CET, IRQ, AFG, and JKT. IRQ and AFG seem obvious enough, but what are CET and JKT? Supy and I put our brains together and came up with Jakarta. Judging from a quick Google search, Supy and I were right on the money. CET is Central European Time. Who knew?

Early in the game, the special messages from President Barack Obama and Secretary of Defense Robert Gates must have played about 10 times each. It’s a weird feeling to sit in on those. It sort of feels like when you’re little and you stay over at someone else’s house and you witness how other families function—it’s pretty much what you imagined it would be, but you feel like you’re witnessing something you shouldn’t.

The nice thing was if we ignored the parts of Obama’s message about “combat” and “harm’s way,” a lot of what he was saying applied to us. “We appreciate your service to our country” and “We miss you” and all that stuff.

John the Welder never got his Peace Corps commercial, but I’ll settle for my mentally edited Obama message and the highlights of Needles, California. 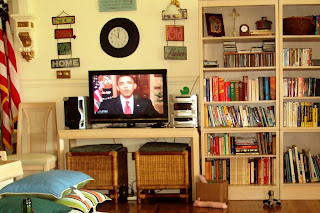 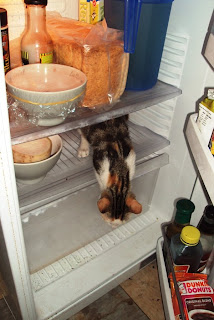 Cat Picture Sunday: Probably because she likes the cool, the cat comes sprinting into the kitchen whenever I open the refrigerator. This was the first time she actually climbed into though. I closed the door on her while I went to grab the camera. 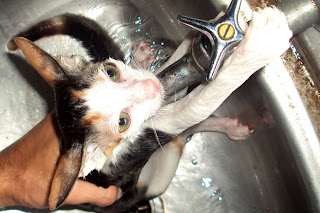 She jumped into the toilet last night. So I gave her a bath when the water came back on this morning. She was very unhappy about the toilet and the subsequent bath. Rough day.

that Scout is absolutely adorable!! Her curiosity is charming.