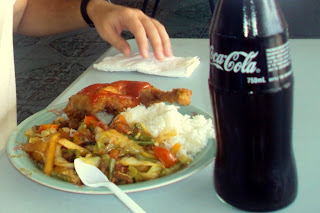 Did you know the availability of Coca-cola is a very simple barometer for the stability of a country’s government? Coke’s is so ubiquitous and its distribution so reliable that it can be considered the canary in the coal mine of national turmoil. Wherever you are, if you can’t buy a Coke, get the hell out of there. I bring this up because I ordered a Coke at the nightclub tonight, and I stood there a while appreciating Samoa’s stability.

The bartender, perhaps noticing my stare, asked me, “So what’s the difference between the Coke here in Samoa and the Coke…”she trailed off briefly “…from where you’re from.” It’s a good question and the subject of many a trite Peace Corps conversation.

Unlike America where most people get their Coke from a spigot at a fast-food restaurant, a great majority of the Coke here comes from glass bottles. There are no free refills in Samoa, mostly because almost no place has a soda fountain. In fact, the only one of which I’m aware is the one behind the counter at McDonald’s. A handful of places offer cans, but the great majority of faleoloas and restaurants only serve glass bottles of Coke from a refrigerator. Even if you order a whiskey and Coke at a bar, the bartender gets out a bottle opener and pours the Coke from a glass bottle into a glass.

Samoan Coke is bottled and distributed at Apia Bottling Company, which also bottles Vai Lima, Samoa’s one and only beer, and Orchy, Australia’s answer to Sunny Delight. Since its bottled right here in country, it’s bound to have a slightly different taste than the Coke we get in America.

I’ve often heard Coke in foreign countries is sweeter because other places are more likely than America to use real sugar rather than corn syrup, but I actually feel like Coke in Samoa is less sweet.

I also feel like its caffeine content is negligible—although, did you know Diet Coke has more caffeine than regular Coke? I had always suspected this to be the case, and during one of my escapist moments at eCivis (my post-college job most akin to Dunder-Mifflin), I spent some company time researching caffeine content.

In any case, Jordan, who grew up in Atlanta and has Coke running in his veins, appropriately seems the most opinionated about the quality of Samoa’s Coke. Shortly after we arrived, he had a particularly nasty bottle of Samoan Coke, and considered writing a letter to Coke headquarters. But he since come to embrace Samoan Coke.

Back at the bar tonight, I told the bartender I thought the Coke here is less sweet than in The States.

“I think it’s not as carbonated,” she told me.

I shrugged. “Yeah, I guess.” And then I added, “But the Coke here is still pretty good.”

She raised an eyebrow. Pshaw. “The Coke here is better,” she said matter-of-factly.

Coke in a glass bottle beats Coke from a soda fountain any day, no matter where it's from.

Margarita is absolutely right. Coke from a glass bottle is wonderful! Unfortunately I've given up coke because their business practices leave something to be desired. See www.killercoke.org.

Glass bottle is tonnes better than plastic or can.

Your coke bottle and Pinati meal is making me hungry.

hi Matt, enjoying ur posts just wanted to add (few months after you posted this -theres a story why but nevermind lol) Coke in Samoa is manufactured and distributed by Vailima Distributors :) the one in Vaitele :)
my 20sene to add in for ur samoan journey :)