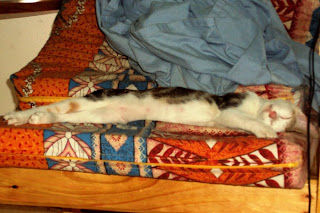 There’s a part in “L.A. Story” where Steve Martin’s character is sitting in his house—I think he has a cat too—not really mopey, but certainly doing nothing. Finally, he gets up and walks to the window and in Magic Marker writes, “Bored beyond belief.” I’m certainly not at that point yet, but aside from last night’s debacle to get back into my house, I’ve spent far too much time in my house this weekend, and the cabin fever is starting to sink in.

In fact, for the entire month of February I’ve spent a lot more time here than usual. There were a bunch of factors that have made the month particularly expensive—a new electrical fan, a plane ticket for May—and fiscal responsibility for the Internet has moved from American Matt to Samoan Matt. So I’ve tried my best to lay low for the past month or so, circling the wagons around my besieged wallet.

I should clarify that I’m not in financial trouble. I have money in the bank, and I’m not rationing food or anything like that. Volunteers receive a modest stipend from the Peace Corps each month, which provides ample funds for eating and drinking and leisure fun. Like everyone else I know, I didn’t join the Peace Corps for the money, but at the same time I’m doing just fine financially. I’m only hunkered down because I’m trying to adhere to my own personal budget.

On one hand it’s been relaxing to hang around the house. There’s been work to do with the school year getting started. Also, after a raucous December and January, the solitary Peace Corps lifestyle is a welcome change.

But as I’ve said so many times before, the Peace Corps lifestyle is one of extremes. January was very social, February has been relatively isolated. Yes, we got together for the Super Bowl and a bunch of people have been in town for meetings at the Ministry of Education, but those are quick events, and the space between is quiet.

Not that there’s a lack of stuff to do at my house. The PCVs who went back to America returned with new movies and TV shows. I’m still trying to fight my way through “The Odyssey.” I need to start making flashcards for the GRE. The cat is good for fleeting moments of amusement. And, of course, there’s days and days of housework and schoolwork to keep me busy.

But more than anything, I want to get out of my house for a while. I had tentative plans to head out to the village this past Friday, but they fell through. I’d also intended to go last weekend, but that’s when the pseudo-hurricane struck.

Maybe I’ll go next weekend. Until then, I’ll be sitting here with the cat, listening to old Fresh Air interviews, playing Spider Solitaire. 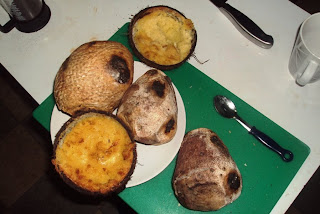 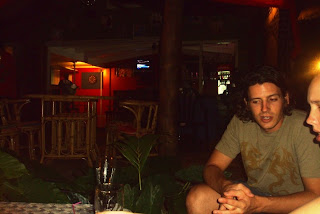 Friday night at Zodiac. See that TV in the distance? That is the only Winter Olympics coverage most of us have seen. 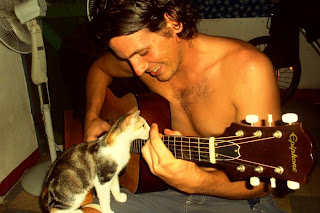 still on the Odyssey huh? Dont know why Odysseus is always regarded as the hero. He sleeps around with different people all the way home and then gets upset with Penelope ( who has been soooooo faithful)because of all the suitors. Like I said before, he's the whiner, she's the real hero.

Have lurked on your blog since you've been there. Was in Samoa two weeks of Jan. Love to read your musings.