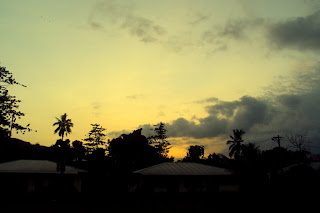 At 10:40 last night, I finished an episode of “Better Off Ted” and realized I could barely keep my eyes open. Every time I’ve started a new job or come back from a long break I’ve gone through this same sleep shock. It takes a week or two for my body to realize it can’t operate at the same energy efficiency. I expect things should be back to normal (i.e. exhausted Fridays rather than exhausted Wednesdays) by sometime next week. Here are some other recent odds and ends:
That's all I got for this week. I hope you're well. Pictures below. 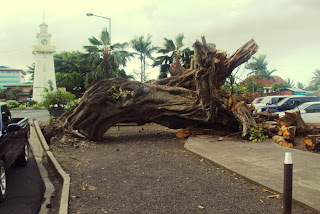 One of the big pulu trees in front of the Government Building blew over during last week's storm. 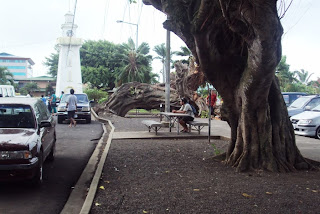 Pulu trees are huge, and I assume it must have taken a considerable amount of force to uproot this one. 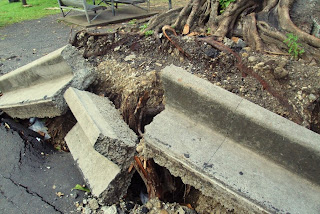 It ripped out a portion of the street on its way down.

The Kookaburra song is a famous Australian rhyme that they teach kids to sing in pre-school and is very well known.

"Kookaburra sits in the old gum tree/merry merry king of the bush is he/laugh kookaburra laugh,kookaburra gay your life must be."

Captain Bligh was taking the breadfruit to the West Indies to provide a cheap and convenient food source for the slaves working the plantations there. The mutineers were probably using the water issue as an excuse to get back to Tahiti.

re the Odyssey: Odysseus is a whiner....the only one with any class is Penelope.