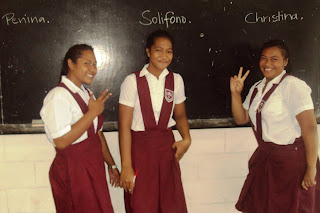 I admit I’ve been a member of many organizations hell bent on icebreakers and getting-to-know-you type of activities. When I worked as an Orientation Advisor back at USC, we went around the circle asking everyone to give their name, major, and hometown like creepy chat room trolls used to throw out the “a/s/l” on America Online back in the old days. So as much as I feared the first day of actual classes, today was more like the first 45 minutes of all the corporate seminars I attended back in The States.

I really got to wallow in all this during my year 10 English class. I lobbied the English department near the end of last year while I was spending every waking hour talking about Computer Studies and desperately wanted to teach something else, if only for the variety. Thing may feel different later, but after one day, I’m feeling good about this decision. The computer classes have already feel like old hat, but I think English may allow me to stretch out a little.

As the Peer Ministry / Troy Camp / RA handbook dictates, I started the activity by answering the questions about myself. “I’m Matt. I’m from San Francisco. I taught here last year. My favorite English word is…” I trailed off and had to think.

Some kid in the back yelled, “Girlfriend.” I laughed.

Someone else yelled, “Fa’afafine.” I laughed again, but clarified that that’s not English.

In the end, I remembered my word project from Mr. Seaton’s English class and said, “Apropos.” It baffled them, but we moved on.

At first the words they chose were an interesting mix of English words that sound like Samoan words—e.g. banana—and warm, cuddly words—e.g. family. I thought banana was a good choice. It’s a funny word.

For some kids, the English word game quickly devolved into “Name a fruit or vegetable.” A bunch of kids got up and threw out Apple, Pineapple, Taro, and Mango. Others came up with more eclectic stuff. One boy said, “Spartan,” which caught me by surprise. Another said “Billabong,” which I allowed despite its being a proper noun and all.

The bell rang long before everyone in class could go, but the representative sampling was good. More icebreakers soon, everybody. 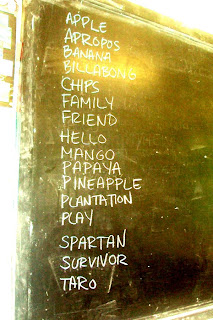 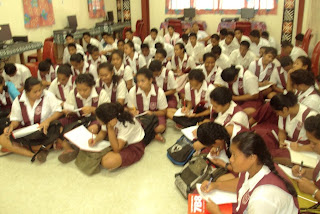 My year 12 class finally met today. I count 53 students in this picture, and there are some who are out of the frame. I'm going to have to pare down the class a bit.

holy hell. 10.4? i didnt know it went that far. good luck with that. btw, i resent you calling ppl who asl'ed trolls. that comment hurt. issue of too many yr12 kids? yea. kick some out, cram em full of theory, test em and then goodbye. worked wonders for me, didnt have a 5 or 6mark to drag me down.

So I knew a professor who would also play this king of word game. In the end he when asked he said he thought the most beautiful world in the English language, if you removed the definition and connotations, was...syphilis.

Earlier this week I used "apropos" and thought of you. Spooky.

amy said...
This comment has been removed by the author.
4:47 PM

i do speak english barb, i speak it real good.

Ok I was going to say syphilis too... only because I thought it was a girl's name!