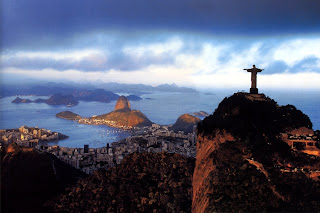 I’ve been searching Google Images for hours. The pictures of dancing Carnival ladies from Brazil are a little to risqué. It took me 3 searches to find a picture of Japanese soldiers from World War II. Looking for photos of Argentine gauchos, I had to wade through pictures of UC Santa Barbara. Photos of Mexican food are a tease. Same with Thai food. Or maybe I’m just hungry. Image-searching Israel is a big pile of depressing.

Last year I started February by dragging my year 13s through 2 months of computer theory sludge. It was a race between everyone in the room to see whose eyes would roll back first. So this year I’m changing the order of the curriculum a little. In a daring move, I’m putting optional material up first: PowerPoint.

After last week’s Ministry of Education meeting, a bunch of Peace Corps sat around discussing which optional topics we were going to do this year. Someone voiced anti-PowerPoint sentiments because of its non-cursor interface and its wide array of tools much different from straightforward Microsoft Word and Excel palettes. But I spoke up in defense of PowerPoint: it engages the kids with artistic inclinations a lot more than Word or Excel or even Internet research. And Word and Excel do have the “Drawing” tool palettes. And its just so fun to watch my kids get all worked up about public speaking.

During our PowerPoint unit last year, I swear it seemed like some of my kids were going to hyperventilate. They would stand up in front of the class, their knees shaking, their voice wavering. I find it so cruelly entertaining. And it’s such a necessary life skill—not PowerPoint, but the idea of presenting and speaking authoritatively on a subject.

It’s difficult to get students to choose a topic. The first time I assigned the project last year, I suggested 5 possible topics and almost everybody in the class chose “Samoan Culture.” Snooze alert. I demanded variety from them, if only to keep me awake. So we chose again. I tried to assign topics that were easy to structure into a presentation, which means lots of lists: Places to Visit in Samoa, Favourite Music, Aspects of a Good Student, etc.

This year’s assignment is much the same, except I’ve changed the topics so each student reporting on a country. I wanted to further their horizons past Samoa and Fiji and Australia and New Zealand, so I gave them a list of countries to choose from. I tried to go for a wide variety with strong, distinct flavors: Argentina, Brazil, Egypt, India, Israel, Jamaica, France, Ireland, Japan, Mexico, Nigeria, South Africa, Thailand, Vietnam.

For the most part, students have gotten into the spirit of the project, although there’s been some difficulty finding source material beyond Microsoft Encarta. There was also some mild francophobia on display when Tafale asked if she could ditch France for Japan. Yeah, that’s cool.

To aid them in finding visuals, I've volunteered to find pictures on the Internet.  I’ve also had to fill in some gaps. I told Amanda I wanted to know about sacred cows in India. And for the food slide in the Mexico presentation, Motu was pitifully brief. I asked Luaao to talk about feijoada in his Brazil presentation. He looked at me funny. “How do you spell that?” 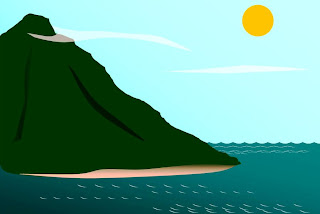 I get a little bored while the kids are working on their presentations in class, and it's probably for the best that there are no games on my computer. So I've taken to drawing seascapes in PowerPoint. Like this one.

can i ask about using wikipedia as a source? i am def. part of the anti-powerpoint crowd, gave kids too much freedom, the freedom produced crappy work. hope you kids do better with the pp than mine did, later