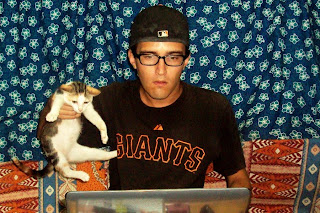 When I arrived, my school had 14 brand new computers. I use one as a server, and my vice pule took one for her office. That leaves 12 student computers. In order to serve as many grade levels as possible, there is only enough time in the week to allow for one Year 12 class. Finally, in my experience in teaching computers, two students on a computer is almost too much company, and three is more than a crowd—particularly for students who don’t have a computer at home and therefore need to make the most of in-class practice.

Over the last 2 weeks, I’ve had somewhere around 55 showing up. I gave them these two weeks to prove themselves (and to bask in the air conditioning), but tomorrow I post a list on my door of who’s officially enrolled. Everyone else is going to have to choose a different Option 2 class; i.e. history, chemistry, or accounting. Today I sat down and had my one-man draft.

On the first day of class, I outlined the 3 things I would look at when making the cut. Those three things are:
I admit there was a fourth criterion I did not mention: my gut. As much as I’m trying to be objective about building my class roster and allow equal opportunity and blah blah blah, I think it’s reasonable to allow wiggle room for my own subjective opinion.

I did not mention how much any of the above factors would be weighted, but now that the draft is over, I can tell you the process and you can approximate. First, I had my “Free Pass” list; that is, on the first day of class I looked at who showed up and immediately had 5 or 6 who I wanted in my class. Call it favoritism, call it whatever, over the course of the past year, certain students have set themselves apart be it by scoring high, making a noticeable effort, or otherwise generally impressing me.

Chronologically, I looked at the essays next, but there was little differentiation. Maengi also pointed out students may have had parents or older siblings write the essay. It was a good point. I didn’t score them. But I did make a list of who did and didn’t submit one.

Friday’s test was probably the biggest factor. It effectively separated the note-takers from the AC-loafers, the future computer geeks from those with passing interest. While I graded the entire test, I looked at the breakdown afterward, and the best predictor of whether a student made it or not was one question about extension cards. Just about everyone who made it in could rattle off a little blurb about modems and network cards. Good on them.

My gut did wield its ugly head in a few cases. One of my free passers (Peter, in fact!) neglected the essay, which annoyed me. Another free passer, discouraged by the Air Conditioner All Stars, gave up and started attending the history option last Thursday. I talked to her about the decision, and she’s coming back to computers tomorrow. And then there are two other cases I’m going to file under “Exceptional Circumstances”. I’ll keep my eye on them.

It may seem unfair to reward the shirkers and Orwellian to allow some students to be more equal than others, but I’ve looked over the list, and I’m comfortable with who got in and I don’t feel like I’ve slighted any of those who didn’t. Also, as a high school teacher (and inherently, amateur guidance councilor), I think it’s my responsibility to recognize potential in the students that sometimes don’t recognize it in themselves. Sometimes those kids just need someone to light a fire under them.

Also, Peter’s not his real name. 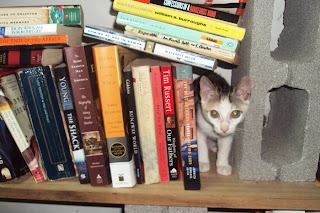 Scout has taken to hiding behind the books on my cinderblock bookshelf during moments of cat privacy. It's funny because she's almost completely out of sight despite being directly across the room from me... at eye level. But her tell-tale tail hangs down and gives her away.

This sounds like one of those obnoxious stories at the end of Sunday's Marmaduke, huh? 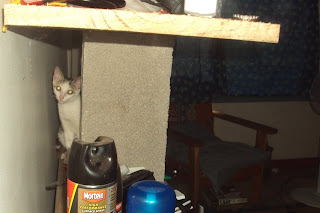 Scout the Literary uses gaps in the books to get in and out of her hideaway.

you and scout are having way too much fun. btw, is that "guns germs and steel" on the bookcase in the first picture? that's on my bookcase too, in my need to read pile.

You're slowly becoming one of those people who post too many pics of their cat.

:) i say the gut is also SUPER IMPORTANT! :) enjoyed the blog & lol@comment of too many pics of their cat...I dont think there is anything wrong with that at all :)
manuia galuega Matt