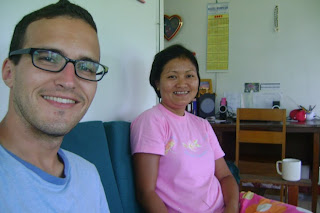 “This is the part of the day where I listen to NPR and play Spider Solitaire and space out,” I told myself as I staked out a spot on the couch directly in front of the fan. I got home from school and fed the cat, and there was some follow-up business regarding yesterday’s draft, but by about 2:30 this afternoon, I was ready to vege. I had some non-urgent errands to run in town, but 3 hours later, no progress was made on that front. That’s when I heard Maengi’s door swing open. “Matt?”

I stretched like a cat after a nap. Yesterday afternoon Maengi asked me to take a look at her computer. She had a virus that was using up major bandwidth on her Internet connection, disabling the antivirus program, and that blocking access to Windows Explorer and other applications. I’ve gone on virus-hunting missions with Koa in the past—Koa’s an impressive virus hunter—but when flying solo, I tend to prefer the all-encompassing Windows re-install.

Maengi needed time to find her XP CD, so I told her we could try again this afternoon. I had aspirations of early evening exercise, but given my afternoon inertia, I couldn’t justify postponing my date with Maengi’s computer. I grabbed my external hard drive (to store any files she wanted to save) and headed over.

With me at the helm, fixing computer problems tends to be an exercise in the blind leading the blind. Luckily, the Windows XP re-install process is pretty foolproof.

Maengi brought out banana chips and apple juice while I transferred folders to my hard drive. “Do you remember a year 13 from last year named David?” she asked.

“Yeah. He took computers last year. Why do you ask?”

“Oh no!” I admit I smirked a little. Teenage pregnancy is never ideal, but both of these kids had finished school, and what else could I do but enjoy a mild scandal.

As it turns out, Maengi had a slew of scandals to tell me about, most of which happened before I got here. A couple stories she told blew my mind.

I don’t know if being aware of all this context will make me any more effective at my job, but I guess it makes me feel like a part of the story.

I only caught one snag re-installing Windows: for some reason Maengi’s laptop retained all of its drivers except the modem. This was extra frustrating because the modem driver had to be re-installed at one of the computer shops in town last week. But I looked around on the back-up, and after 15 minutes of tinkering, I found it. Maengi was thrilled.

I can’t help thinking the way my school was before I came won’t be much different from how it will be after I leave. But I like to think I’ve made some sort of difference. 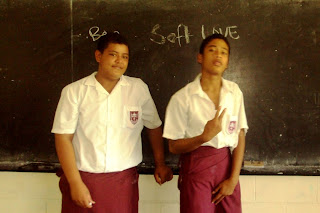 The assignment was to write your name on the board and then stand under it so I could take your picture. This kid came up to the board and wrote "Soft Love". Awesome.

What the .... some Portuguese beer drinker is visiting your site?

Hey, have you thought about a firewall to practice safe computing? Also, how about getting a fast DSL line for the school with a wireless router and firewall and then you and the others who live on campus can dump the dial-up lines.