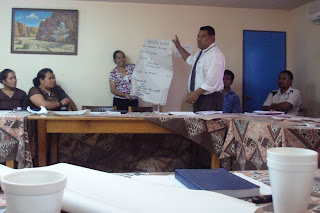 The feel of confrontation is inevitable. There are seven Peace Corps Volunteers left in Samoa who teach computers, and when the Ministry of Education invites all the computer teachers in the country to descend on Apia to discuss the new curriculum for year 12, we’re bound to form a coalition. We don’t hold planning sessions beforehand, and we don’t strategize our arguments. But issues arise and our brash American big-headedness comes through, and the room becomes tense.

Part of the problem is meetings like this become a sort of reunion for PCVs, and naturally we sit next to each other, and already we’re a row of palagis. AJ and Supy walked in a couple minutes late this morning, which broke up our a contingent a little. That was good.

Since almost all of us go most days without seeing another palagi, we share a common “Stranger in a Strange Land” feeling, and when we come together, it’s not abnormal for us to share our problems and commiserate. Thus by the time these meetings roll around, our common concerns have already been marinating in our collective conscious, sometimes for weeks or months.

Sticking us all in room together with the Ministry leadership, clashing seems unavoidable; the situation puts our diplomatic skills to the test. Growing up in America, we learned to question authority, a tactic which we see as innocent, but can be interpreted as brash and disrespectful. This can lead to big tension over insignificant issues.

For whatever reason, the South Pacific Board of Education puts a lot of emphasis on Microsoft Access, and so the Samoan Ministry of Education mirrors that sentiment. In the new curriculum, the Microsoft Access unit is weighted higher than the Microsoft Excel unit, 20 points to Excel’s 15. This drives the Peace Corps collective conscious up the wall. It’s 5 stupid points, but some PCVs grumbled, and there was grumbling in the room regarding the grumbling, and then there was grumbled voting. It was really fun.

I kept quiet during that debacle, but a few minutes later I couldn’t help taking issue with how the scheduled exam dates didn’t correspond at all with the time allotment for each unit recommended in the curriculum. So I entered the fray. It’s can be a difficult conundrum to voice concern without sounding impolite. Even using “I” statements—I don’t understand blah blah blah—and speaking in the passive tense allows for tones of arrogance and presumptuousness.

The mid-morning tea break allowed everyone to take a deep breath, and it let the air out of the tension. It was well-timed. There was tea and kekesaina, and we all got the hell out of that room for a while. The awkwardness wore off, and small talk and casual joking slowly seeped in.

When we came back to the table a half-hour later, the conversation was far more cordial and cooperative. As a collective body, we came up with new exam dates and brainstormed potential student projects for the optional topics. Dare I say, the meeting was productive.

Next time we just need a goofy icebreaker. Everyone loves those. Right? 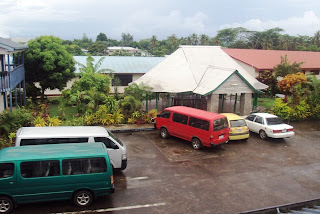 The meeting was held on the hill above my school. I'd never seen it from this perspective. 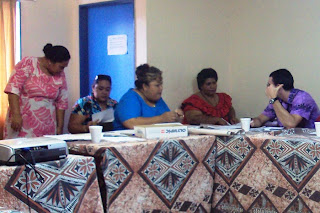 AJ chatting with other computer teachers. 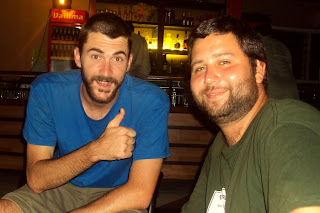 Phil and Koa (and their beards) came in for the meeting.

ps. When walking to work 2 mean dogs ran towards me. Without thinking I swooped down and grabbed rocks to scared them away. I credit my instinctual reactions with reading your blog. : )