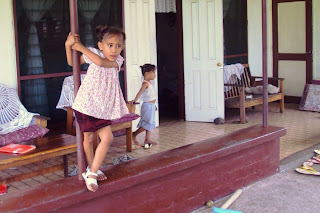 We had a young boy who lived in our dormitory my senior year of college. A professor lived in the building, and her 3-year-old son was a regular at mess hall meals and various building functions and events. One day he’d be palling around with Lee from the 4th floor, another he’d be going on RA rounds with Anita. It seemed like a unique place to grow up. The student turnaround would be great and jarring; so many people to hang around with, but they’d be constantly coming and going.

Similar thoughts ran through my head as Paul and I walked on to my school compound. “This would be a cool place to grow up, I think,” I told Paul. He thought about it and nodded. It’s certainly not the same as USC—only a handful of students live on campus, and meals are not communal. But it still seems like a great atmosphere for a kid.

Yes, last month I got pissy about the Bye-Bye Kids, and I maintain that sing-songy “Bye-bye” is one of the most irritating sounds in the English language. That said, it’s been fun having another family on campus. My pule’s youngest daughters, twins Faith and Grace, are almost four years old, and with a slew of new playmates, afternoons are much louder on campus with the kids playing out on the expansive lawn.

Faith and Grace are darling, and though I’ve never interacted with them except in passing, we’ve slowly built up a rapport. Initially, I’d walk by and smile and give them a “Mālō,” which at first was met with shyness and nervous stares. After a while they started to smile back, and eventually they started to wave. The wave is hilarious because it’s so short and slightly awkward. I’ll walk by and say hello, and they’ll stare for a few seconds, completely still, and then the wave will come in a burst. It’s a very simple raised open hand, very quick, and then right back down.

Only when the “Bye-bye” kids showed up did they start speaking. I worried briefly when the new boys exposed Faith and Hope to the ear-wrenching “Bye-bye, ” but then there was a point-blank interaction in which I gave my “Fā” firmly, and since then they’ve mostly dropped the “Bye-bye.” So now in addition to the quick-fire wave, Faith and/or Grace will also mutter an extremely quick and slightly awkward “Fā.” It’s darling.

And the new boys are a couple of goof balls, which is entertaining. When I passed their house on the walk to school this morning, they were peering out the screen door, getting their hair combed from behind. They were giggly, and one shouted “Mālō!” I gave them a “Manuia le aso!”, which made them giggle more. And then, “Yea, manuia!” I admit I like playing the role of the exotic-but-friendly palagi.

In any case, I like having the little kids on campus. 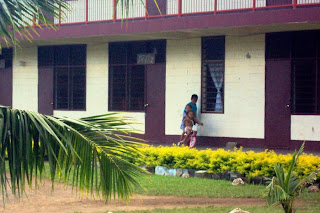 Topless biking by the 11.2 classroom. 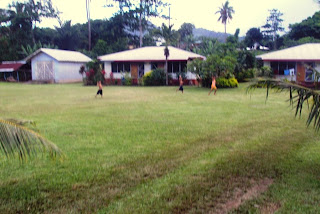 Boys chasing each other, waving at the camera. 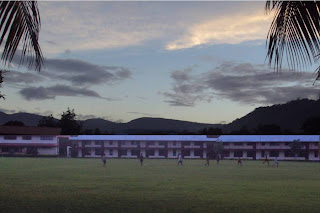 Dusk over the rugby game.
Posted by Matthew at 7:00 PM