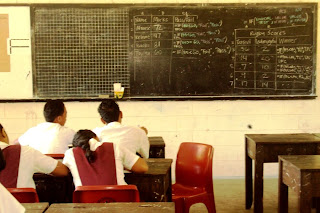 When I was little I wanted to be a scientist. For a while there I wanted to be an astronaut, and then a paleontolog- ist. And then I turned eight. I enjoy science lite. Back in the States I subscribed to Discover Magazine and watched Bill Nye whenever I could catch him. But when it comes to academic science, my eyes start to glaze over. When I taught in Oakland, I had a couple 6th grade science classes in which the overarching topic for the year was geology (snooze alert), which didn’t go over well. So my kneejerk reaction to teaching science is skeptical at best.

But now I’m going to be a science teacher.

Maengi called my cell phone in the middle of sixth period today. “Can you take science?” she asked. I thought she was asking if I could come and watch her class. I was busy in the computer lab at the moment, so I immediately said, “No.”

But then she clarified she didn’t want me to come right now. She wanted me to actually teach a science class. “Ohhhh...” said I.

Three new teachers start tomorrow, one in computers, one in business studies, and one in English. But as it turns out, one of the science teachers has left for Australia for 3 or 4 months to attend to a sick relative. Two steps forward, one step back.

So where do I fit in? Here’s my vice pule Tupou’s train of thought: There will be 2 computer teachers, but we won’t be adding any more computer classes since it would too much trouble to squeeze computer classes into the schedule for years 9 and 10—also starting this late in the term would put them at a disadvantage on the church-wide tests in May. So essentially the new guy is going to get a chunk of my current classes. I’ll keep years 12 and 13 and my English class, but that’s only 17 periods a week. So I have room in my schedule. And thus the question. “Can you teach science?”

I’d lost bargaining chips early in the discussion when I hesitated on taking a science class. If I’d have been gung-ho about it, I probably could have swung 10.1. Tupou and Maengi look at the sheet in front of them and cross things out and write things in, and then one says, “How about 9.2?”

I shrug. Why not? I haven’t interacted with this year’s Year 9s at all, but I hear they’re relatively smart compared to years past.

I’m still processing this change, but I think it sounds okay. I’ll be going from teaching 25 periods a week to 21, which is 1 more than what the church considers a “full schedule,” but I can deal with that. Mostly I’m excited for some variety in my day. This news comes on the heels of Friday’s post where I whined about teaching the same computer lessons over and over and over.

I think teaching science and English and computers might even fit my personality more. I’d rather dabble in many things than immerse myself in one.

Or maybe it will be terrible. We’ll see. 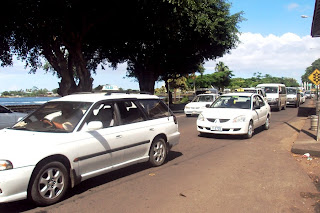 Traffic has been heavy in downtown Apia because the big road outside of town is being paved. 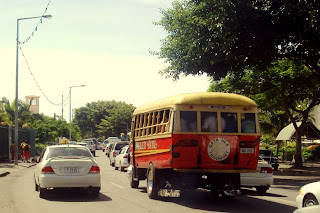 Science! That's very exciting. I can't wait to hear more about it.

Love reading your blogs - really miss the life back in Samoa!