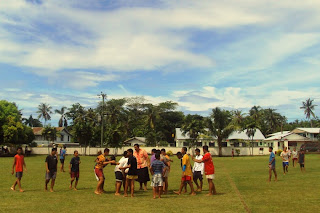 I’ll be the first to say that as assistant coach of the sixth grade rugby team, I am totally useless. I only have a vague under- standing of the sport, and I’ve never taken much initiative in terms of conditioning. I could probably lead the team in aerobic exercises or running drills or call out the 1 – 2 – 3s for cherry-pickers, but this role is taken by the head coach or delegated to one of the team captains. So most days I sit on the sidelines watching the dandelions grow. Until today.

When I showed up at practice after school today, the team was just about to start scrimmaging. I’m used to a structure of practice in which you start off with warm-ups and then some drills, and then, if there’s time, a scrimmage. But today was backwards day, and the boys started off with a scrimmage and then did wind sprints and stretches. In any case, as I walked out on to the field, one of the boys called out, “Hey Matthew!” I looked at him. “Can you watch my shoes?” He tossed his standard issue Jandals on the sideline.

Part of why I’ve never taken on even nominal responsibilities is no one’s ever asked. Apong found his niche keeping the water bottles filled on game day. Beyond that, I look for ways to pitch in, but the whole program is pretty sparse and basic. Thus the sitting and watching. But today some kid asked me to watch his shoes.

So I went and picked up his shoes and moved them to where I was standing on the sideline at the half. I stood over them, watchful and vigilant. This was my big break, and I made it my goal to make these the safest shoes on the field.

I watched the game, scanning our team, occasionally watching the other teams do laps around the field. The girls were busy with netball practice, and I watched them for a bit, always mindful of the shoes. And then I saw someone sitting on the steps in front of the computer lab.

One of my students from last year called last night to ask if she could stop by at 11 this morning to type up an assignment, but she never showed. Was that her? Another student has been showing up weekly—usually on Mondays—for computer tutoring. Was that her?

I was far away, so I walked forward to get a better look. I had to move in quite a ways before I realized it was a boy sitting on the steps—a boy I didn’t know. Clearly he was not waiting for me.

By now, you’ve probably guessed what happened. Indeed, when I returned to my spot, the shoes were gone. I failed at the most basic of assistant coach assignments.

I thought maybe the kid had picked them up. Or maybe I was just confused about where I’d been standing before. I searched around a bit, and then gloomily turned back to sit and watch practice.

And of course, when it was time to go home, the boy came to me, “Matthew. My shoes?”

I shrugged. “I don’t know what happened to them. They’re not there anymore.”

So he and I went to look for his shoes. The search seemed pointless to me. Every single student at my school, boys, and girls, wears white-soled Jandals with a red strap. There were probably 15 pairs strewn about the field, and countless more on the feet of many of the players.

But I was wrong. Like monogamous penguins finding their mate in a sea of doppelgangers, it took less than 10 seconds for this kid to identify his shoes on the feet of one of the older boys. He went and confronted the boy who laughed and gave the shoes back. It was unclear if they knew each other, or the whole thing was a joke, or what. The boy sprinted off to change out of his clothes before I could get the full story.

In any case, I’m worried my reputation as a lackluster assistant coach was only reinforced this afternoon. Oh well. 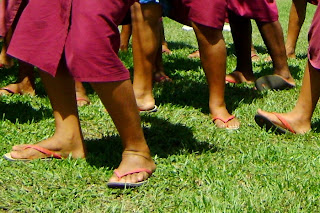 An example of the red-strapped Jandal ubiquitous across my campus. 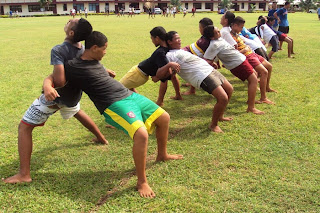 The boys doing an ab exercise. 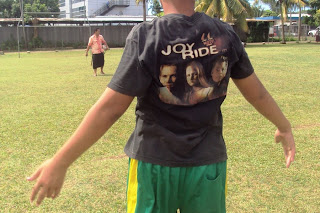 This kid wore a "Joy Ride" shirt to practice. "Joy Ride" was the hit film starring Paul Walker, Steve Zahn, and Leelee Sobieski about 3 teenagers who bait a truckdriver and then spend the rest of the movie trying to get away from him. Cool shirt.
Posted by Matthew at 7:00 PM

Thank goodness the shoes were located. I think I won't tell Michael this story. He takes his shoes very seriously.

You're seriously on a comedy roll...I laugh out loud as I read every post these days.

Lame duck or not, you've still got it.

First of all who knew that the US has a rugby team, and how's it possible Samoa can win an international tournament of any kind with the training conditions you describe at high school level.

this story made me really nervous. byyyyyyyyye.