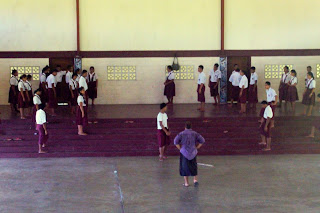 We diagrammed the heart in Science today, aorta and ventricles and all. I’m a little worried about my science class because we’ve still got 3 units of material to cover and not very much time until the common exams in late April. And school-wise, this week is a joke. “Tomorrow is Sports Day,” I announced, “So we’ll finish up the circulatory system on Wednesday since I probably won’t see you tomorrow.” The class let out a collective “YESSSSSS!”, which I like to think they did because they don’t have class rather than they specifically don’t have my class.

If there’s a term for Holy Week in Samoan, I don’t know it. In fact, the term “Easter” doesn’t get much play either. The focus of this week is Aso Maliu, the day of death, Good Friday. And we’re to the point now when it feels like just about everything we do is in some way preparation for Friday.

To’o, a science and religious knowledge teacher, stopped in during my English class this morning to collect two students, a boy and a girl, to go rehearse for Wednesday’s passion play assembly. “Who are your best actors?” he asked. I shrugged and turned to look at the prospects. To’o picked out a boy from the front row and one of the school’s more well known female vocalists from the back. Fine by me.

Rehearsal went on all day in the Great Hall. I know because my computer lab overlooks the Great Hall and I got to hear the assembly’s soundtrack over and over and over. The play is being directed by 4 teachers, who have given up all of their classes today, and probably tomorrow and Wednesday, to coordinate Wednesday’s assembly.

I don’t mind all this. If nothing, I’m reveling in the downtime. I’m exhausted, and I welcome the break in activity. I just think it’s a bit of a farce to hold classes this week. Classes were shortened today because of the morning assembly. We’ll have a half-day tomorrow for sports. I’m guessing we’ll have a morning assembly on Wednesday and then another one in the afternoon. No classes Thursday, Friday, or Monday.

As I said, I welcome the break, but when am I going to finish teaching my kids about the circulatory system?

There again, no one else seems to worried, so I’m not going to get myself all worked up. If the kids don’t learn it before the mid-term, I’m sure we’ll find time to teach it to them before the end of the year. Unless sports and assemblies get in the way. 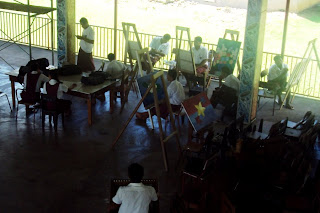 The new art room has been too hot lately, so in addition to passion play rehearsal (up top), art classes have also been meeting in the hall, easels and all. 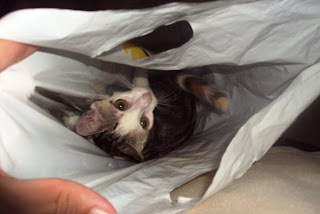 The cat jumped into a plastic bag this morning while I was getting ready for school, and then got stuck. It was pitiful and hilarious.